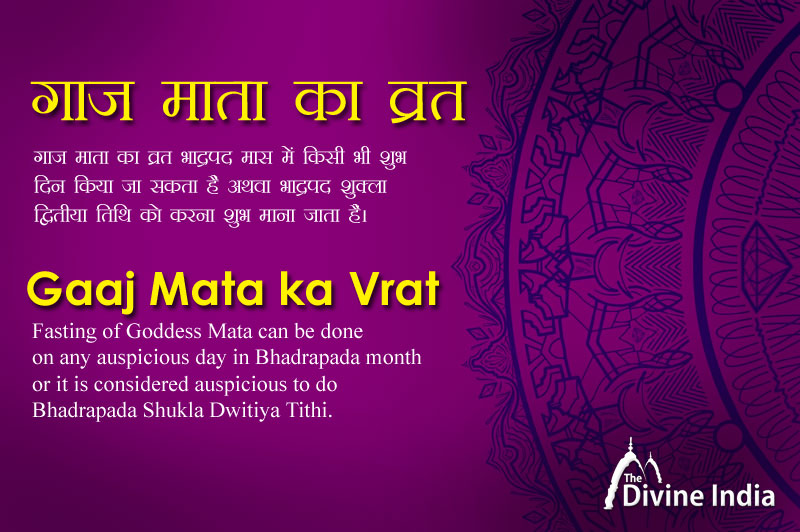 In the picture, Bhil portrays a boy with Bhilani. Baskets should be placed on the head of Bhilani. Put four puris and pudding at seven places and put cloth and rupees on it. Listen to the story of Gaaj by making 7 grains of wheat in the hand of Satia on a water urn. Ardhya should be given to the Sun God with the urn of water in hand. After this, Devotees touch the feet of Sasuji by placing the whole on the entire veil. After this, after giving food to Brahmins at night, give them Dakshina and eat it themselves.

In ancient times there was a king and queen. The king and queen had no children, so both were very unhappy. One day the queen asked for a vow to Gaaj Mata, if I have children, I will offer pudding of Halwa Pudi. After this, the queen became pregnant. In the ninth month, the queen gave birth to a son, but the queen forgot to offer the pudding of Gaaj Mata's pudding. It has been a long time but the queen has not indulged, then Gaaj Mata became angry. One day the queen's son was sleeping in the cradle. The wind blew the boy along with the boy and took him to the house of a childless Bhil Bhilani.

When Bhil Bhilani came home from the forest, he saw the boy sleeping in the cradle in his yard. Bhil-Bhilani had no children. Bhil Bhilani was very happy and started nurturing the boy with affection. There was a washerman in the kingdom who washes both the king and the washerman. When he came to the king's house, he saw that the soldiers were running here and there. On being asked by the washerman, the soldier told that the prince was taken away by Gaaj Mata. Then the dhobi said, take me to Raja ji. The washerman told the king that a child had come to a Bhil's house by flying. The king called Bhil and asked if this child came from where the Dhobi said, "My wife is fasting for Gaaj Mata. Gaaj Mata is happy and gave us this son." Then the queen remembered that I had offered Prasad of Halwa Pudi of Gaaj Mata, which I forgot to do. The queen duly vowed to observe the fast of Gaaj Mata and offer double pudding. If my son comes back, I will. Gaaj Mata was happy and returned her boy and gave her son to Bhil Bhilani. The king was happy and gave a lot of wealth to Bhil Bhilani. The queen used the fast of Gaaj Mata to offer pudding of Halwa Pudi.

Hey mother! Just as you gave wealth and son to the Bhil couple and brought back the son of the queen, similarly, O mother keep everyone rich by giving them money and a son.