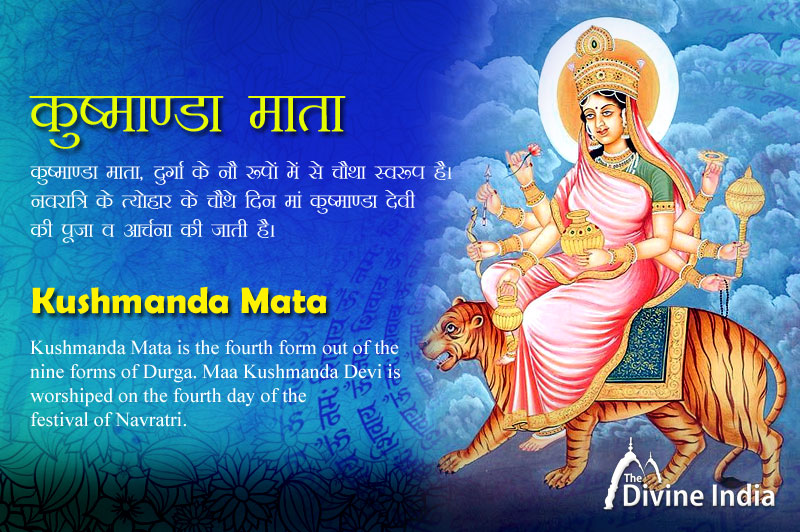 Kushmanda is worshiped on the fourth day of Navratri and Goddess Kushmanda is believed to improve health and bestow wealth and power. Goddess Kushmanda has eight hands and for this reason she is also known as Ashtabhuja Devi. In his seven hands, respectively, kamandala, bow, arrow, lotus-flower, nectar-filled urn, chakra and mace are held. In the eighth hand there is a rosary giving all the siddhis and funds. Kushmanda Mata's vehicle is a lion.

It is believed that Kushmanda Devi created the universe when the universe did not exist. Therefore, this is the original form of the universe, the original power. Their abode is in the inner world of the solar system. Only Kushmanda Mata has the ability and power to reside there. The radiance and radiance of his body are equally as radiant as the sun.

The ten directions are being illuminated by the radiance and light of the Mother. The brightness in all the objects and beings of the universe is its shadow.

On this day, as far as possible, a bright married woman with a big forehead should be worshipped. It is preferable to feed them curd, pudding in their food. After this, fruits, dry fruits and good luck items should be offered. Due to which the mother is pleased and the desired results are obtained.

Worshiping Maa Kushmanda removes all the diseases and sorrows of the devotees. Their devotion increases life, fame, strength and health. Maa Kushmanda is going to be pleased with little service and devotion. If a man becomes his refuge with a sincere heart, then he can very easily attain the supreme position.