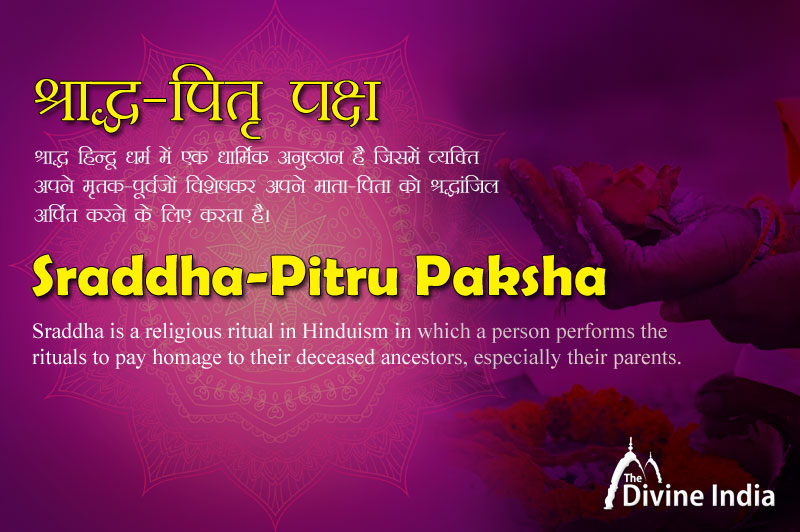 The full moon of Bhadrapadra and the time from the Pratipada of the Krishna Paksha of Ashwin month to Amavasya is called 'Pitṛs Paksha'. Śrāddha is a Sanskrit word meaning any work that is performed with complete honesty. Śrāddha is a religious ritual in Hinduism in which a person performs his deceased ancestors, especially his parents, to pay homage. Which is called Śrāddha. These days can also be called days to remember their ancestors. The eldest son or grandson has the right to perform Śrāddha. In the Śrāddha of the man, they give food to the Brahmin and in the Śrāddha of the woman to the Brahmin. Kheer poori is special in food. Dakshina is given after the meal. In 'Pitṛs Paksha, on the death date of the ancestors, their Shradh is performed. Śrāddha is considered very important in Gaya. After giving water to the deities in the 'Pitṛs Paksha, the dead should be named and given to them as well.

The person who performs the Śrāddha invites the Brahmins on that day, invokes the divinity of their parents, worships them and feeds them. Performs a havan (fire ritual). Agni and Soma - The deities who send offerings to the ancestors, nurture and protect them and provide rice balls to the departed souls known as ‘Pind Pradan’.

The person doing the Śrāddha provides hospitality to the Brahmins and gives Dakshina. On this day, food is also given to crows because crows are also revered in Hindu religion. It is said that the crow reaches the food to its Pitṛs, so it is also customary to feed the crow.

During Śrāddha, no new clothes are bought in Hinduism and no auspicious work is done. The Amavasya of Bhadrapada is called Sarvapitru Amavasya or Mahalaya Amavasya. This part has been considered inauspicious in Muhurtashastra.

Pind Dhan in Gaya is considered to be of great importance, but many people visit Hindu pilgrimage sites to perform Śrāddha ceremonies like Haridwar, Gokarneshwar, Nashik, Jagannath Ghat - Kolkata, Pushkar etc. Haridwar is also known for its Hindu genealogy registers. In Badrinath Dham, Śrāddha related works are done at Brahma kapal place. It is said that the Pitṛs get liberation from hell by the ingot done at Brahmakpal place here. At this place Lord Shiva and the Pandavas were liberated from the sin of killing Brahm.