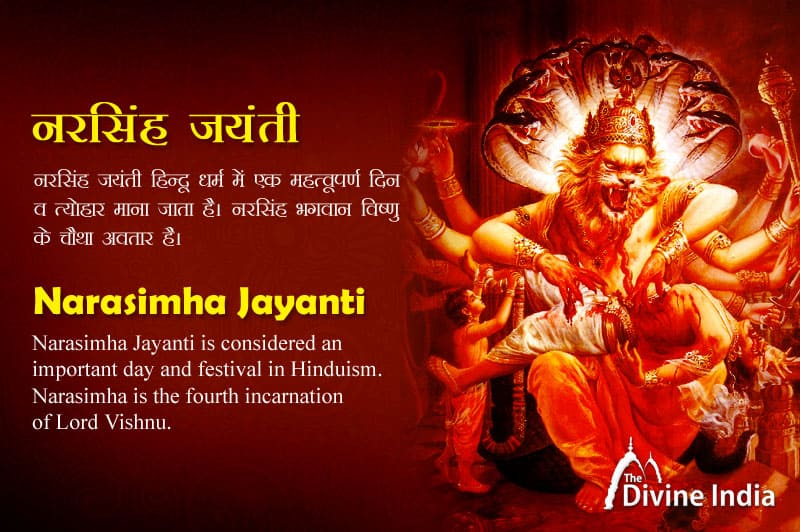 Narasimha Jayanti is considered an important day and festival in Hinduism. Narasimha is the fourth incarnation of Lord Vishnu. In Narasimha Avatar, Lord Vishnu took half the lion and half an human. Narasimha was like his face and claw lion in the incarnation and the rest of the body was like humans. Narasimha Jayanti is celebrated like a festival in Hinduism. This festival is celebrated on the day of chaturdashi of Shukla Paksha of Vaishakh Month. On the same day Narasimha Bhagwan killed the monster named Hiranyakshap. All Vishnu devotees also doing fast this day.

Narasimha Lord Hindu Date Chaturdashi appeared at the time of sunset and that is why God Narasimha is worshiped at sunset. The purpose of Narasimh Jayanti is to remove the iniquity and walk on the path of religion. Religion is to do the right deeds and do not harm anyone.

Why did Lord Vishnu took an Avatar?

Narasimhadeva about are the prayers of many, including some key These are:

Meaning - is furious and Shur-heroic Mahavishnu, extends your flame and heat round. O Narasimhadeva, your face is ubiquitous, you are through death and I surrender you Smcsha.

Narasimha Jayanti day morning should bathe and should worship God Statue of Narasimha and Vishnu etc. Should fast the whole day and sunset times God must worship and prayers of Narasimha. This day it is good to donate the seeds of clothes, precious metals and sesame seeds.