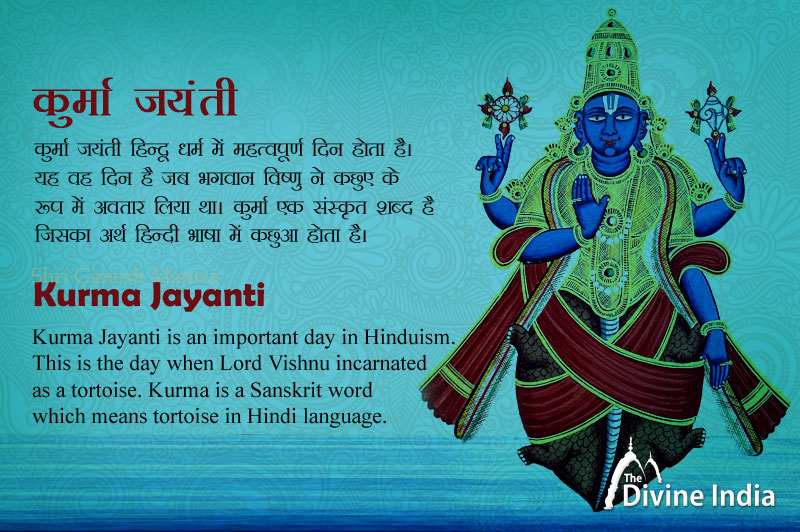 The day of Kurma Jayanti falls on the full moon day in the month of Vaishakh according to the Hindu calendar. According to the English calendar, this date falls between May and June.

According to the legend, it is believed that Lord Vishnu in the incarnation of Kurma carried the Mandar mountain on his armor during the churning of Kshirsagar. In this way, with the help of Lord Vishnu, Mandar Parvat and a serpent named Vasuki, the Devas and Asuras churned the ocean and obtained fourteen gems.

According to the legend, seeing the bravery of Devraj Indra, sage Durvasa presented him with a garland of Parijat flower, but Indra, not accepting it, wore Airavat and Airavat threw it on the ground, Durvasa got angry with this and cursed the gods. Gave that the goddess of wealth Lakshmi should disappear. Due to which the gods and demons went to Mahadav. Mahadav asked both of them to churn the Kshir Sagar together. For the churning of the ocean, Lord Vishnu incarnated as Kurma and with the help of Vasuki and Mandar Parvat, the ocean was churned.

This form Sri Hari is known as the second incarnation of Vishnu and Hindu devotees worship him religiously on this day with full enthusiasm and dedication. On the day of Kurma Jayanti, special pujas and ceremonies are organized in the temples of Lord Vishnu all over the country. The celebrations at the 'Sri Kurman Sri Kurmanatha Swamy Temple' in Andhra Pradesh are grand and the festivities attract devotees from far and wide.