21 facts related to Ramayana that you should know ... 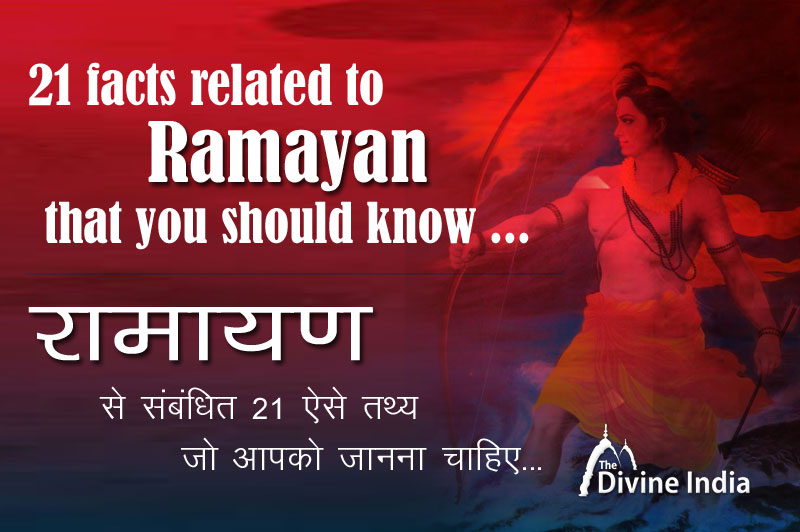 Ramayana is a sacred book of Hindus. Ramayana has a special place in Hinduism because Ramayana is related to Lord Shri Ram. In Hinduism, Lord Rama and the epic 'Ramayana' occupy a very special place. The original Ramayana was composed by 'Rishi Valmiki', which was in Sanskrit language, but many other saints and Ved pandits like Tulsi Das, Sant Ek Nath etc. have also composed other versions of it, which was done in simple language. .

2. Rama gave Vibhishan the boon of being immortal. Such is the immortality found: It is said by Lord Shri Ram that he was given the responsibility of propagating religion and truth in Lanka and was also given the boon of immortality.

4. Goddess Sita used to carry the bow of Lord Shiva in the game from childhood. That is why in his swayamvar, a bow named Pinaka was placed on it, a condition to offer it.

5. Once Ravana went to Mount Kailash to see Lord Shiva. They found Nandi on the way, whom Ravana ridiculed by calling him the monkey's mouth. Nandi then cursed Ravana that you will die due to apes.

6. Ravana did not touch Mata Sita. That is why, when Ravana reached heaven during his conquests, there he found a nymph named Rambha. Ravana was fascinated by that. When Ravana tried to touch him, he said that I am reserved for Nal Kubera, son of your brother Kubera. Therefore, I am like your son's bride. Ravana was so proud in his power that he did not listen to him. When Nal Kubera came to know about this, he cursed Ravana that after today, if a foreigner touched a woman against her will, then 100 pieces of her forehead would be cut.

7. Ravana's sister Suparnakha cursed Ravana himself that his Holocaust be destroyed. Suparnakha's husband was the commander of the demon king Kalakeya, who was slaughtered by Ravana during his world conquest campaign.

10. When Ravana came out to conquer the world, he had a battle with King Anaranya of Ayodhya. In which Ravana was victorious. The king attained unrestrained heroism. He cursed dying that your death will be done by a young man of my family.

11. According to Balmiki Ramayana, once Ravana was going from his Pushpak Vimana. He saw a beautiful young woman meditating. The young woman was Vedavati who was doing penance to get Lord Vishnu as her husband. Ravana was fascinated by her and tried to force her to take him with her. Then that ascetic woman cursed Ravana that the cause of your death would become a woman and gave up her life.

12. Ravana reached Yampuri when he was on his mission of conquering the world. Where he fought with Yamraj. When Yamraj wanted to attack him, Brahma ji stopped him. Because of the boon, Ravana's slaughter was not possible by any deity.

13. Ravana asked for Amrita's boon from Bramha ji, then Bramha ji did not give Amrita's boon. Then Ravana had asked for a boon that his demon and goddess should not die, so Lord Vishnu was born as an ordinary human being because Ravana considered a man to be a man.

15. When Ravana's brother Kumbhakaran was asking for a boon from Bramha ji, Mother Saraswati, at the request of Indra, sat down for the Kumbhkaran. Whose Kumbhakaran had asked for the boon of Nidrashan in exchange for Indrashan.

17. When Lord Rama requested Varun to make a passage to the sea, but Varun did not listen to Lord Rama's request, under the anger Shri Rama invoked Brahmastra, which once invoked it was mandatory to use it. . Varun requested to help Shri Ram. Then Lord Rama used Brahmastra in place of Dhritulya. Which is today known as Rajasthan.

18. Symptoms had not slept for a single day to protect her brother and sister-in-law in the exile of 14 rains. On the first night of exile, when Rama and Sita were sleeping, Nidradevi appeared to Lakshmana and Lakshmana asked him to bless him so that he would never feel asleep. Devi Nidhi asked her if anyone else could sleep instead of you? Laxman advised that his wife Urmila could sleep. After hearing this, Goddess Nidra asks Urmila about this and Urmila happily accepts it.

19. The descendants of Shriram also participated in the war of Mahabharata. Who was born in the 50th generation of Kush, the son of Rama, Kush, who fought on behalf of the Kauravas during the Mahabharata period.

20. It was Lord Shri Ram who first performed the task of tying all the castes and sects of India in one sutra during his 14 years of exile. By creating one India, he had united with all Indians and established a united India. The Indian state of Tamil Nadu, Maharashtra, Andhra Pradesh, Madhya Pradesh, Kerala, Karnataka including Nepal, Laos, Kampuchea, Malaysia, Cambodia, Indonesia, Bangladesh, Bhutan, Sri Lanka, Bali, Java, Sumatra and Thailand etc. folk-cultures and texts even today This is why Rama is alive.

Blog/Story
God will support you if your feelings are pure