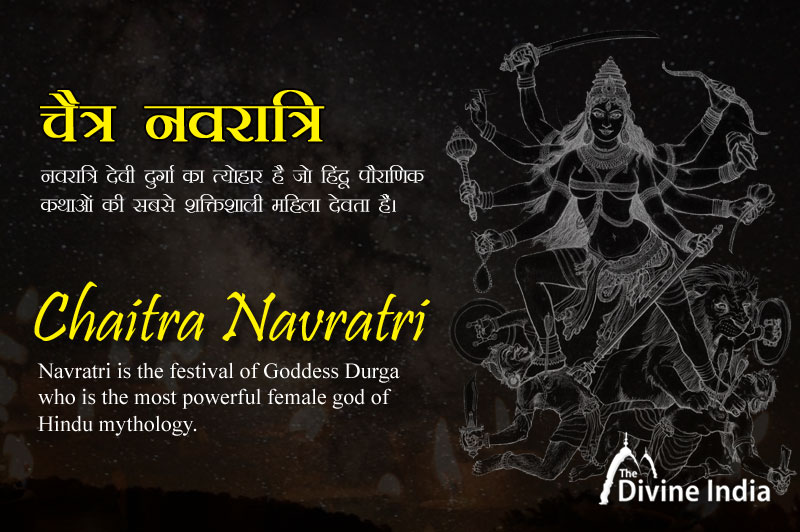 Chaitra Navratri is a famous Hindu festival. Chaitra Navratri, also known as Vasant Navratri, is a Hindu festival celebrated in the month of Chaitra (March–April) every year. It is a nine-day festival that honors the nine forms of Goddess Durga or Shakti. It marks the beginning of the Hindu New Year. During this festival, devotees fast, pray and perform traditional rituals. The nine days of the festival are dedicated to nine different forms of the Goddess and each day is devoted to worshipping a different form. On the ninth day, the Goddess is worshipped in her full form. Chaitra Navratri is celebrated with much enthusiasm across India and is a joyous occasion for Hindus.

Ram Navami, the birthday of Lord Rama is usually on the ninth day during the Navratri festival. Hence Chaitra Navaratri is also known as Rama Navaratri.

Meaning: During the dispute, despair, intoxication, or travelling, in water, fire, or mountains, amidst enemies, and in the forest, protect me, for you are my refuge. You are the way, the only way, Bhavani!

The festival is marked by traditional rituals such as chanting mantras, lighting diyas or small lamps, and offering prayers to the Goddess. Devotees also observe fasts and perform pujas or religious ceremonies.

Chaitra Navratri is an important festival for Hindus, as it is believed to be an auspicious time to seek the blessings of the Goddess and to improve one’s spiritual and material

Blog/Story
Another name of the world is Death Folk.