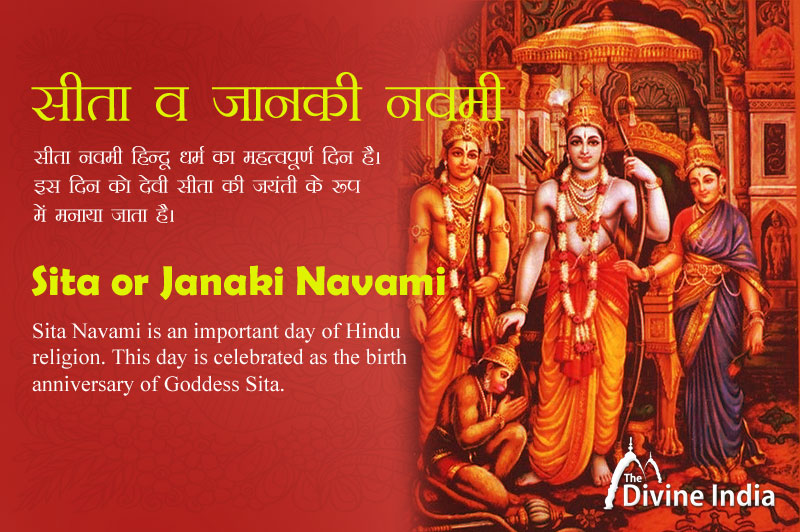 It is believed that Mother Sita was born on Tuesday in Pushya Nakshatra. Goddess Sita was married to Lord Rama. Lord Rama was also born on Navami Tithi during Shukla Paksha of Chaitra month. In the Hindu calendar, Sita Jayanti comes one month after Ram Navami.

Goddess Sita was the adopted daughter of King Janak of Mithila. Hence this day is also known as Janaki Navami. According to Hindu mythology, when King Janaka was plowing the land to perform a yajna, he found a baby girl in a gold coffin. A plowed land was called 'Sita' so King Janak named the girl Sita.

On the day of Sita Navami, special worship and rituals are performed in Lord Rama and Janaki temples across the country. Temples are decorated with flowers and lights. Bhajan programs are also organized at various places after the recitation of Ramayana. Some take out Ram Rath Yatra through the temple and chant 'Jai Siya Ram' and sing devotional songs all the way.

Goddess Sita is worshiped on the day of Sita Navami. Married women observe a fast on this day and pray for the long life of their husbands. It is believed that observing Sita Navami fast brings virtues like modesty, motherhood, sacrifice and dedication in a person. Worshiping Sita and Lord Rama together brings happiness and peace in married life.