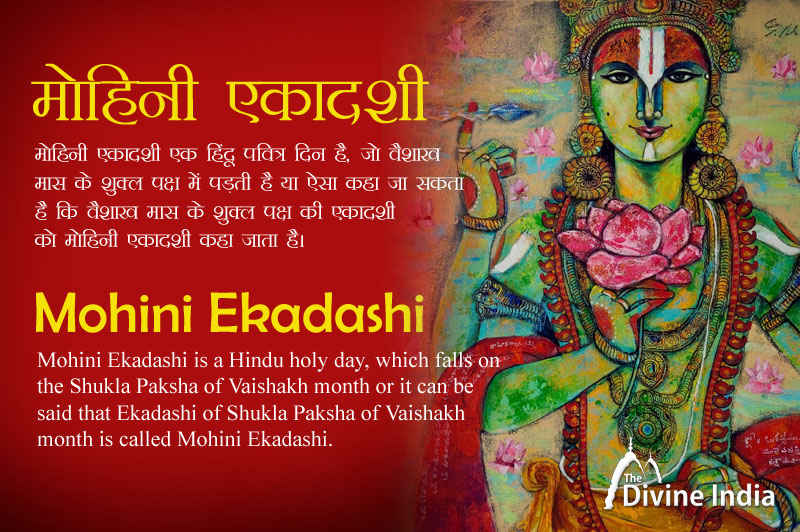 Dharmaraja Yudhishthira had asked Lord Krishna, what is the name of Ekadashi of Shukla Paksha of Vaishakh month? Shri Krishna said, O Rajeshwar! The name of this Ekadashi is Mohini. I tell you a story that Guru Vashist had told to Shri Ramchandraji. Once Shri Ram said, O Gurudev! Describe a vow that will destroy all sin and misery. I have spent a lot of time in disconnection of Sitaji.

The story of Mohini Ekadashi Vrat

A king had five sons. Sumna, Dutiman, Medhavi, Sukrit and Dhrshtbuddhi. Dhrishtbuddhi was the fifth son, he was a very adulterant, a misogynist, an insult to the elders. He had great attachment in gambling and other miseries. He would be eager to meet prostitutes and wasting the father's money on the path of injustice. The king got fed up and drove him out of his kingdom. He lived in the jungles and wandered. One day, under the sanskars of a previous birth, he wandered away, hungry and thirsty, he reached the ashram of Maharishi Koundinya. The sage explained to him the importance of satsangati. This changed the heart of that Dhrshtbuddhi. He repented of his sinful deeds. Then Maharishi Koundinya advised him to observe Vaishak Shukla Mohini Ekadashi fast. With the effect of fasting, the intellect of Drishtibuddhi became clean. Thus he was freed from his sins and sorrows. Even today, this fast is performed with reverence.