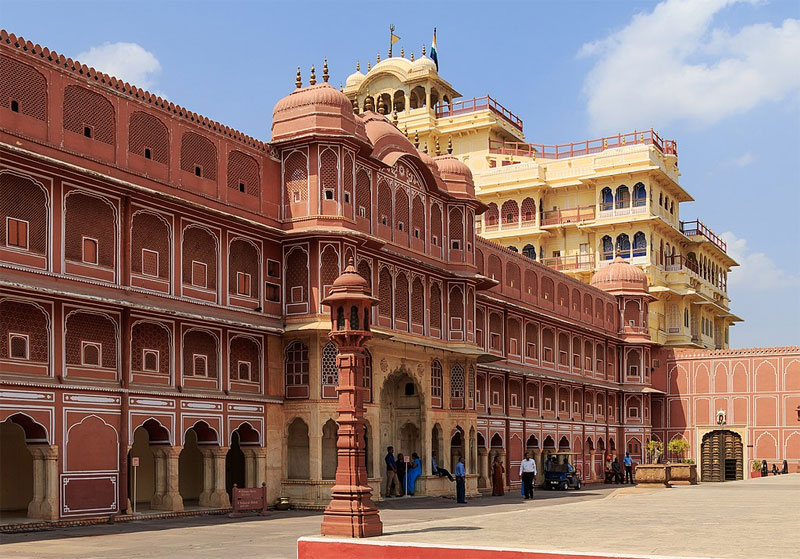 Jaipur is the home of many attractive tourist spots. City Palace is one of them. Located in the heart of the Pink City Jaipur, the City Palace was where the Maharaja reigned from. The palace is located towards the northeast side of central Jaipur. It was built between 1729 and 1732 AD by Sawai Jai Singh II. But the urban layout of the city of Jaipur was commissioned to Vidyadhar Bhattacharya and Sir Samuel Swinton Jacob. The architectural style of the palace is a fusion of Rajput, Mughal and European styles. The palace is made up of red and pink sand stones.

Maharaja Sawai Jai Singh started the construction of the City Palace while they were residing in the Amer Fort in Jaipur only about 11 km from City palace. The palace was planned to overcome the shortage of water due to rising population.  The main architect of the palace was Vidyadhar Bhattacharya, who designed according to the Vaastushastra.

The City Palace is a vast complex and includes several buildings, courtyards and gardens. The City Palace complex is spread over a large area occupying one seventh of the old city of Jaipur. It is located in the middle of the old city wall of Jaipur and built on the banks of the Pichola Lake. Tripolia Gate, Virendra Pol and Udai Pol are the three main gates of the palace. Virendra Pol is the entry gate of the palace. Mubarak Mahal (Welcome Palace) built in the late 19th century for Maharaja Madho Singh II as a reception center for visiting dignitaries comes after entering the gate. The Chandra Mahal and the Mubarak Mahal are two main palaces in the complex. The palace also has also four smaller gates in the third courtyard, which are believed to represent four seasons. The peacock or the Mor Gate represents the autumn season, the Lotus Gate symbolizes the summer season while the Leheriya Gate for the spring season and the Rose Gate is the winter gate.

The City Palace housed the throne of the Maharaja of Jaipur who headed the Kachwaha Rajput clan. A museum and the residence of the royal family are two places which are opened for the public. Pritam Niwas Chowk, Diwan-i-Aam, Diwan-i-Khas, Bhaggi Khana, Maharani Palace and the Govind Dev Ji Temple (dedicated to Lord Krishna) are some of its attractions. Maharani Palace was occupied by the royal queen and serving the purpose of a museum, housing arms and weapons of the royal clan presently. Main attractions of the City palace are two silver jars which have found place in the Guinness Book of World Records as the largest silver vessels in the world.

The palace opens on all days of week from 9.30 to 5.00 pm. The best time to visit is between October and March.  Light and Sound Show at the palace starts from 7:30pm every day. The City Palace is a landmark in Jaipur and is also a very popular tourist hotspot. It is a paradise for art and history lovers.

Blog/Hinduism
Why the tradition of getting up in Brahma Muhurta?