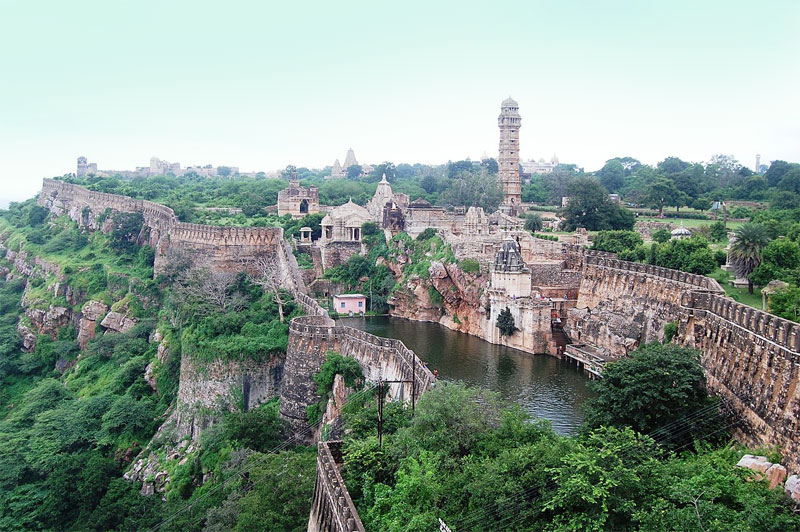 The Chittor Fort or Chittorgarh is one of the finest monuments of India and the largest forts in India. Chittorgarh, also called Chittaur, from the 7th century to the 16th, was the capital of Mewar under the Rajputs. The Chittorgarh Fort is the best known fort in Rajasthan. This fort was built by various Maurya rulers in the 7th century. It is said that Bhima, one of the Pandava brothers, built the fort and began at the time of Pandavas of Mahabharata.

The Chittorgarh Fort which stands atop a 180 meter high hill is spread across 700 acres. It is located at a distance of 112km from Udaipur, on a high hill near the Gambheri River in Chittaurgarh, Rajasthan. It opens on all days of week from 9:45 am - 6:30 pm. The fort has a long story of romance, courage, determination and sacrifice.The history of this majestic fort can be traced during the time of Khilji's.The fort was attacked three times and every time it got saved by the daring heroism of the Rajput warriors. The fort was attacked for the first time by Allaudin Khilji to fulfill his desire to make off with Rani Padmini in 1303. It is believed that Queen Padmini and the women of the court sacrificed themselves in a pyre of fire rather than submit to Allaudin Khilji. This sacrifice has been called the “Jauhar” of the woman of the fort. For the second time, the Fort was sacked by Sultan Bahadur Shah of Gujarat in 1535that caused immense destruction. The third attack was done by Mughal Emperor Akbar to conquer Maharana Udai Singh in 1567. It was finally in 1616, under the rule of Mughal Emperor Jahangir that the fort was returned to the Rajputs.

The fort of Chittor is regarded as one of the most outstanding forts of the country and is indeed the "Pride of Rajasthan State". It is believed that the name Chittorgarh is derived from its builder Chitranga, who was the ruler of a local clan that identified themselves as Mauryas. Another folktale believed that the construction of the fort to Bhima, who struck the ground and helped the BhimlatKund to surface. Inside the fort there are the temples of Meera, an ardent devotee of Lord Krishna and KhumbaShyam. Chittorgarh fort is also called as Water Fort. The fort had 84 water bodies, out of which only about 22 exist today which Include talabs (ponds), kunds (wells), and baories(stepwells). This fort spreads over 700 hectares, which include 40 percent to water bodies. The average reservoir depth is about 2 m. Therefore, these reservoirs can store about 4 billion liters of water and an army of 50,000 could live in the fort for four years without fear of thirst.

Vijay Stambh(pillar), KirtiStambh, Gaumukh Reservoir, RanaKumbha Palace, Padmini Palace and Seven Gates of the Fort are some of its main attractions. The fort is roughly in the shape of a fish. The fort complex comprises 65 historic built structures, among them 4 palace complexes, 19 main temples and 4 memorials. The structures and features of the fort depict Rajasthani style of architecture.

The fort and the city of Chittorgarh host the biggest Rajput festival called the "JauharMela". Sound and Light Show is also organizedhere and it starts from 7pm. The Chittorgarh Fort was declared a UNESCO's World Heritage Site in the year 2013.