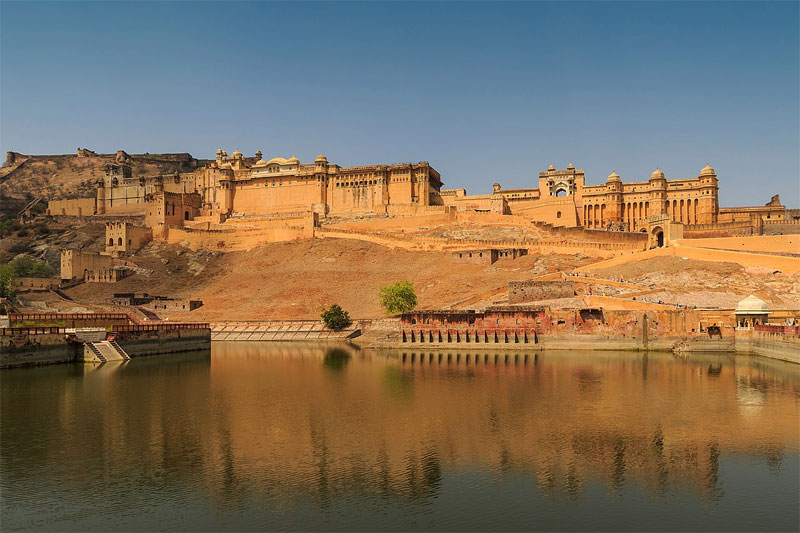 The Amber fort also known as Amer fort is one of the most famous and tourist spot of Rajasthan. Amer, originally, was the capital of the state before Jaipur. It is an old fort, built by Raja Maan Singhin 1592. Later, Maan Singh started to rule the area surrounding the fort which was called as the Amer state. The fort is located in Amber, 11 km from the city of Jaipur. The Amer Fort was built in red sandstone and marble and the Maotha Lake adds a certain charm to the entire fort. The fort has influences of both Hindu and Muslim architecture. It has the 'Shila Devi' Temple and the 'Ganesh Pol' which is a gate that leads to the private palaces of the kings and as well the 'Diwan-i-Aam', the 'Sheesh Mahal' and even the 'Sukh Mahal'. Shila Mata is the family deity of the Kachhawaha Rajput royals. The black stone idol of the Goddess is believed to have been imported from East Bengal.

The fort took 100 years to complete. Sheesh Mahal is one of the most beautiful attractions inside the Amber Fort.  Sheesh Mahal (Mirror Palace), which is also called Jai Mandir, is one of the most beautiful mirror palaces in India. Elephant rideand the Maota Lake situated at the base of the fort are probably other major attractions of the fort. This lake was also the source of water for the Rajputs.

According to folklore, it is believed that the fort was named after Amba Mata, a form of Goddess Durga, who was the presiding deity of the Meenas who lived in this region. Once upon a time, Amer was ruled by a small community named the Meenas and the region was known as Khogong. It was later invaded by the Kachwahas (a Rajput clan) who made it their kingdom. Thus, it became a new capital of the Kachwaha Rajput clan and got the name Amer (Amber).

There are two ways to reach the fort either by elephant ride or by walking. The fort has 4 sections, each with the premises.The Surajpol (main gate), leads to the Jalebchowk, (the main courtyard), which leads to the palace and then towards Siladevi Temple. Second courtyard includes Diwan-e-Aam or Hall of public audience is a large hall that stands from the support of two rows of pillars. The hall is open on three sides. There are two magnificent buildings laid out in the third courtyard. On the left, the beautiful Jai Mandir is situated.The building opposite to Jai Mandir is called Sukh Mahal (Hall of Pleasure). This place was used by the royal family for alone time to rest. The royal women including the mistresses lived in this fourth courtyard of the palace which is known as zenana.

Amer Fort, along with five other forts in Rajasthan, was declared as a UNESCO World Heritage Site under the group 'Hill Forts of Rajasthan' in the year 2013. The fort is opened to visitation from 08.00 am in the morning till 06.00 pm in the evening and Light Shows from 07.00 pm to 09.00pm.