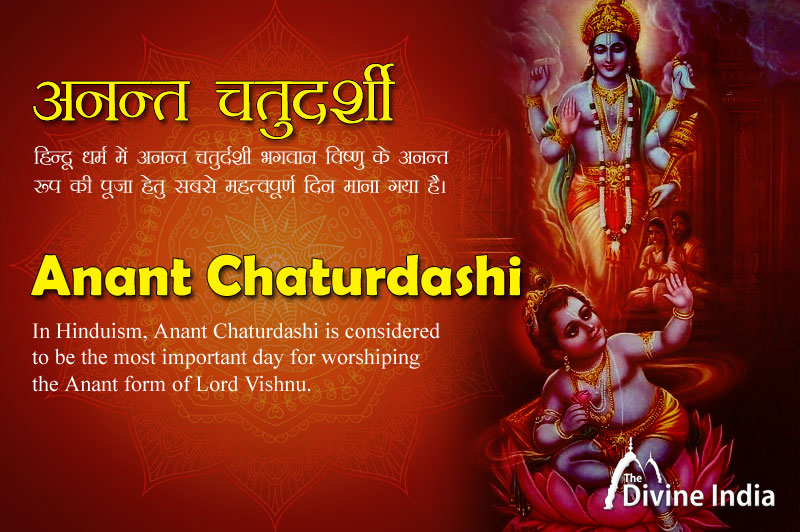 The day of Ananta Chaturdashi is an important day for both Hindu and Jain religions. For Jainism, it is the day when Lord Vasupujya, the 12th Tirthankara of the current cosmic cycle, attained nirvana. It is the last day of the main Jain festival, Paryushan. In Hinduism, Anant Chaturdashi is considered to be the most important day for worshiping the Ananta form of Lord Vishnu. The Chaturdi of the Shukla Paksha of Bhadrapadra month is celebrated by observing the fast of Lord Ananta. It is targeted by the name of this fast that this day is the day of devotion to Vishnu, the creator of the world that does not end.

On this day, by worshiping the Ananta God, the Ananta sutra, which protects from the troubles, is tied. In the Mahabharata, Maharaj Yudhishthira performed the Rajasuya Yajna. The construction of the Yagya mandapa was not only beautiful but also wonderful. There used to be confusion of land in water and place in water. Duryodhana, admiring the beauty of the Yagya Mandap, fell into a pool considering it a place. Draupadi ridiculed him saying 'Andha, the son of the blind'.

This thing pierced like an arrow in Duryodhana's heart. Duryodhana took this revenge by defeating him in a gambling game and the Pandavas had to undergo 12 years of exile. Then Lord Krishna advised Yudhishthira to observe the Ananta Chaturdashi fast with his brothers and Draupadi. Dharmaraja Yudhishthira, along with his brothers and Draupadi, performed this fast with full law and wore the Ananta sutra. The Pandavas were freed from all the troubles due to the effect of Anant Chaturdashi fast.

Worship should be done with mantra. Here Lord Vishnu is in the form of Shri Krishna and Sheshnag is present in the form of Kaal. Hence, both are worshiped together.

The Kalash is established by taking a bath. The Ashta Dal on the Kalash is installed in a pot made like lotus, the Ananta God made from Kusha. Put 14 pieces of turmeric-colored raw cord near it and worship it with smells, flowers, incense, lamps, naivedya. After that, the pure Ananta should be tied in his right arm after meditating on the Ananta God. This thread is going to give Ananta fruit. The fourth knot of Ananta is the symbol of the realms. There is Ananta God in them.

There was a monk named Sumantu in Satyayuga. His daughter Sushila was extremely gentle as per her name. Sumantu Muni married that girl to Kaundilya Muni. Kaundilya Muni was returning to his ashram with his wife Sushila. When it was night on the way, they started dusk on the river bank. Sushila saw many women worshiping some deity there. On Sushila's asking, the women methodically explained the importance of the Ananta fast. Susheela, knowing the importance of the Ananta fast, worshiped the infinite God with those women and took Anantasutrabandh. As a result, in a few days his house was full of money.

One day, the sight of Kundilya Muni came upon the Ananta sutra tied in his wife's left hand, on seeing which he got confused and he asked - Have you tied this sutra to tame me? Sheela politely replied - No, this is the holy sutra of the infinite God. But Kaundilya, blinded by the beauty of Aishwarya, also misunderstood the right thing of his wife and broke the Ananta thread as a spell of captivating magic and burnt it by putting it in the fire. The result of this heinous act also came to light soon. All their property was destroyed. Being forced to live in a poor and low condition, Kaundilya Rishi decided to atone for his crime. They went to the forest to ask forgiveness from the Ananta God. What they found on the way, they used to ask for the address of Ananta God. Even after searching a lot, when Kundilya Muni was not interviewed by the Ananta God, he was disappointed and was determined to give up his life.

Then he gave Ananta vision and said - "O Kaundilya! The Ananta formula which you have despised is the result of all this. I am happy because of your repentance. Go to the ashram and fast for fourteen years in a lawful manner. All your troubles will be gone. Kaundilya Muni regained lost prosperity by following the rule of Ananta fast for fourteen years.