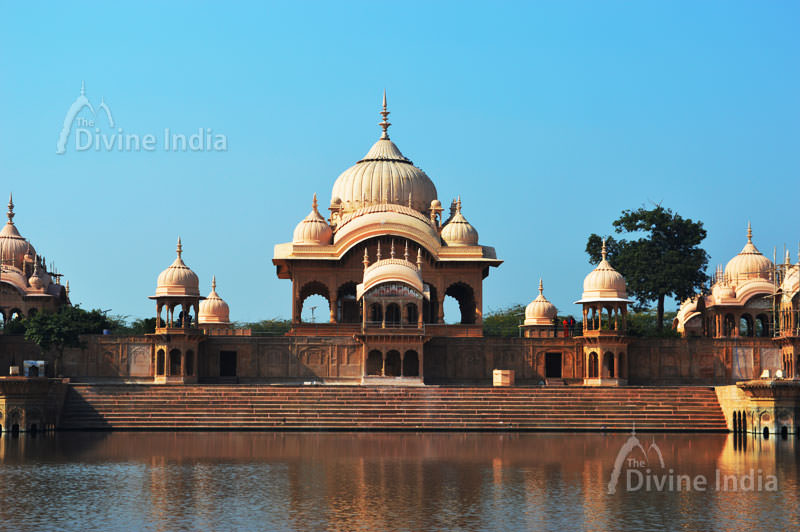 Kusum Sarovar is a historical place in Govardhan, District Mathura of Uttar Pradesh, India. It is  a tourist place located on holy Govardhan Parikarma route.  It is maintained by the government. It is situated at a distance of about 2 km from Govardhan temple. It takes around 30 min by feet to reach here from holy Radha Kund.

Kusum Sarovar is about 450 ft long and 60 ft deep. It is surrounded by stairs from all the four sides. There are many Kadamb trees planted around the sarovar.

It is believed that the sarovar got its name from one of the friends of Radha whose name was Kusum. It is also said that Lord Krishna used to collect flowers and  make garlands for Radha here. The old pond was restructured by King Veer Singh of Madhya Pradesh in the start of 17th century.Later on King Surajmal renovated this and gave it a beautiful and artistic shape. King Jawahar Singh had got very aesthetic domes created in the west of the sarovar in the remembrance of his father King Surajmal and three mothers named Kishori, Hansiya and Lakshmi. The main dome is of King Surajmal which depicts the events from his life and the various leela of Lord Krishna.

A scripture present at South-east direction of the sarovar depicts that Mughal King Akbar had implemented ban on animal slaughter here. On the same scripture, there is a note written in 1855 by the British which depicts that they also followed the ban ordered by Akbar. 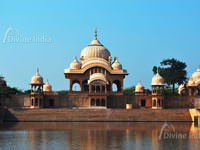 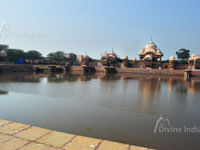