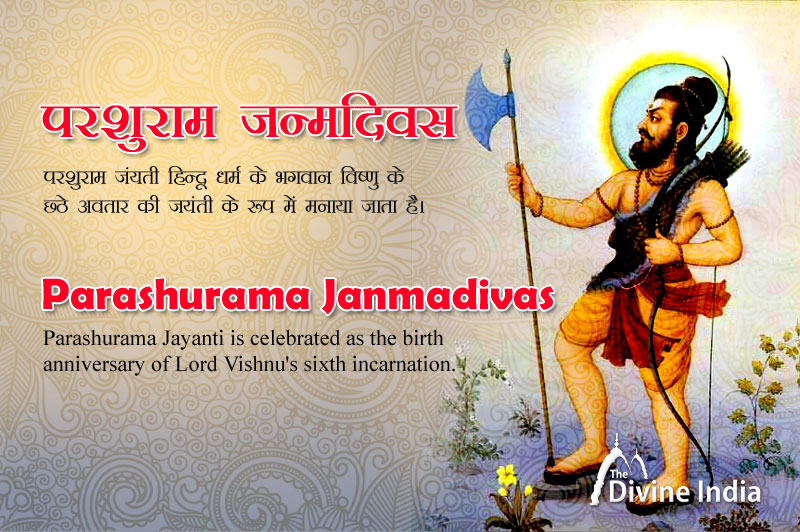 Parashurama Jayanti is celebrated as the birth anniversary of Lord Vishnu's sixth incarnation. The birth anniversary of Parashuram ji every year comes during the month of Vaishaksha during the Shukla paksha Tritiya. Bhrigureshtha Maharishi Jamadagni was done Yajna for the son and pleased Devraj Indra and got a boon for his son. Maharishi's wife Renuka gave birth to Mahabahu Parashuram in Vaishakh Shukla paksha Tritiya

It is believed that Lord Vishnu took the incarnation of Parshuram as its form. When evil on earth was spread everywhere. The warrior class, with weapons and powers, abused his power and started torturing people. Lord Parshuram had kept the cosmic balance by destroying these wicked warriors.
In Hindu scriptures, Lord Parashuram is also called Rama Jamadagnya , Rama Bhargava and Veerarama. Parashurama is worshipped as mool purush, or founder, of the Niyogi Bhumihar Brahmin, Chitpavan, Daivadnya, Mohyal, Tyagi, Anavil and Nambudiri Brahmin communities.

Unlike all other avatars, Parashurama still lives on the earth according to Hindu faith. Therefore, Parasurama is not worshiped unlike Ram and Krishna. In southern India, near the Udupi, at the sacred place of the Pajka, there is a large temple that remembers Parasurama. There are several temples on the west coast of India which are dedicated to Lord Parshurama.

According to Kalki Purana, Parshuram will be the Guru of Vishnu, the tenth Avatar of Kalki and will teach him the Martial art. Parashuram will ask Kalki to receive Lord Shiva's penance and Divine weapon. This is not the first time that the six incarnations of Lord Vishnu will meet another incarnation. According to the Ramayana, Parshuram came to the wedding ceremony of Sita and Lord Rama and met Lord Vishnu's 7th incarnation.

Meaning: Parshuram who is well versed with the four Vedas and sports the bow and arrow upon His back (that is the one who has the radiance of both the Brahman (scholar) and the Kshatriya (warrior)) will destroy evildoers either with a curse or with an arrow.