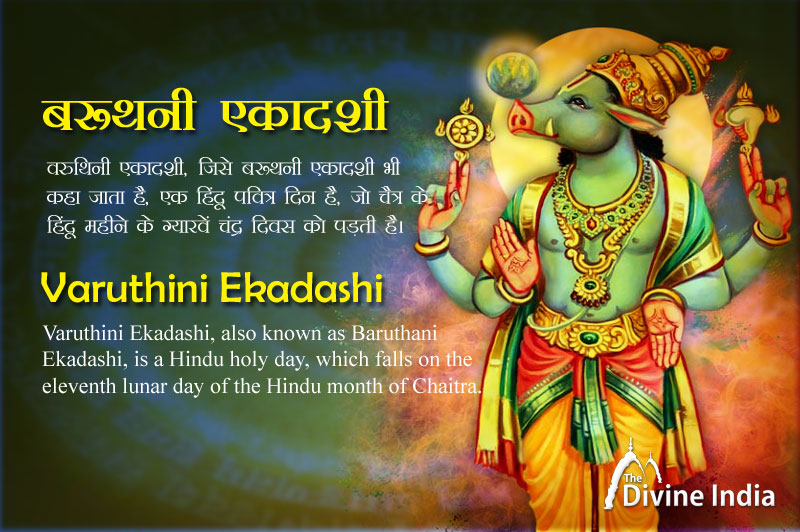 Varuthini Ekadashi, also known as Baruthani Ekadashi, is a Hindu holy day, which falls on the eleventh lunar day of the Hindu month of Chaitra. Varuthini Ekadashi falls in April or May. Like all Ekadashis, Lord Vishnu, especially his fifth incarnation Vamana, is worshiped.

Dharmaraja Yudhishthira had asked Lord Krishna, what is the name of Ekadashi of Krishna Paksha of Chaitra month? Shri Krishna said, O Rajeshwar! The name of this Ekadashi is Varuthini. It is a blessing, a destroyer of all sins, and a salvation in the end.

Fasting on this day has the potential to give up gambling, sleep, dentistry, blasphemy, petty, theft, violence, rituals, anger and abandonment of lies. Doing so provides mental peace. The fast should be eaten as sattvik. Family members should do Bhagavad bhajan at night and do awakening. The donation of food is considered to be the biggest donation on this day.

In ancient times, a king named Mandhata used to rule on the banks of Narmada. He was a very benevolent and ascetic king.

One day while doing penance, a wild bear chewed the leg of King Mandhata. After a while, the bear dragged the king to the forest. King panicked and started praying to Lord Vishnu. Hearing the call of the devotee, Lord Vishnu protected his devotee by killing the bear with his Sudarshan Chakra. Lord Vishnu said to King Mandhata - O Watts! Worship my Varaha avatar idol in Mathura by observing the fast of Baruthni Ekadashi. With that effect, you will be able to regain your feet. This was your past life's crime. The king performed this fast with great reverence and regained his feet.