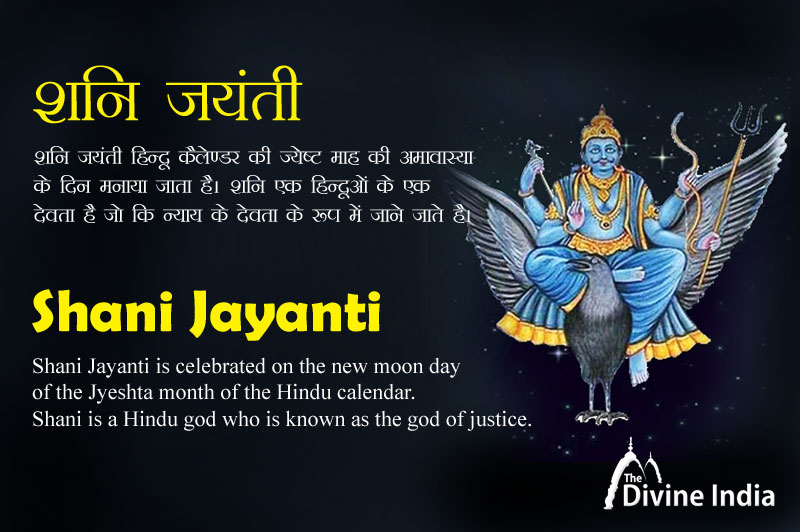 Shani Jayanti is an important day for Hinduism. Shani Jayanti is celebrated on the new moon day of the Jyeshta month of the Hindu calendar. Shani is a Hindu god who is known as the god of justice. Shani Dev Lord Surya is one of the three children - Yama, Yamuna and Shani.

Shani Dev was born from the womb of Chhaya, the wife of Lord Surya. Shani Dev was a devotee of Lord Shiva and it was Lord Shiva who gave him a boon that you will have the best place among the nine planets. Human beings or even gods will be afraid of your name.

Shani Dev is the most attention-grabbing deity due to his influences. They are friends as well as enemies. If they are considered to be antidote, inauspicious and painful, then they are also the provider of salvation. Those who behave inappropriately punish them and those who engage in good deeds, bless them with prosperity.

The justice of Shani Dev is famous all over the world. Shani Dev is known by many names like Mandagami, Surchaputra and Shanishwar. It is said that Shani Dev had punished King Harishchandra a lot. Because King Harishchandra was proud of giving his charity. Due to which King Harishchandra had to be sold in the married market and had to work as a watchman in the crematorium. King Nal and Damayanti also had to wander from place to place as a punishment for their sins due to the influence of Shani.

According to astrologers, it is considered necessary to worship Shani Dev on the day of Shani Jayanti, for those people who are going on Shani's half-century. It is believed that by worshiping and donating on this day, Shani pacifies and removes the sufferings of the affected person.

Shani Jayanti, a very big fair is organized in Shani Shingnapur, a village in the Indian state of Maharashtra and this village is famous for the temple of Shani Dev.

Relation of shani dev with other planets

Shani Dev is considered to be the lord of Capricorn and Aquarius. Mercury and Venus are considered friends of Shani Dev while Sun, Moon and Mars are considered as their enemies. At the same time, their relation with the Guru is of equanimity.

Saturn is said to be the best among the Navagrahas, because it stays on one zodiac for the longest time. Saturn stays in one sign for two and a half years. No other planetary sign lasts so long. Sun, Moon, Mars are considered enemies of Saturn while Mercury and Venus are friendly planets. Jupiter is even planet.

Saturn sitting in the Ascendant is not good and gives trouble to the native. If we talk about numerology, then the number 8 is considered to be of Saturn. If the sum of the digits of the date of birth of any person is 8, then its numeral will be Shani Dev. If the person is born on 8th, 17th, 26th, then the Ankadhipati is Shani Dev. In such a situation, it becomes important for the person to get his grace by pleasing them.

How to please Shani Dev

Black clothes, jamun fruits, urad dal, black shoes and black things should be donated to avoid the angry vision of Shani Dev. Shani Darshan on every Saturday also has significance. By donating, Shani Dev is pleased and gives grace. The grace of Shani Dev can also be obtained by worshiping Hanumanji. Even before donating, taking advice of astrologers can be more fruitful and gives relief from sufferings.

Blog/Story
Another name of the world is Death Folk.