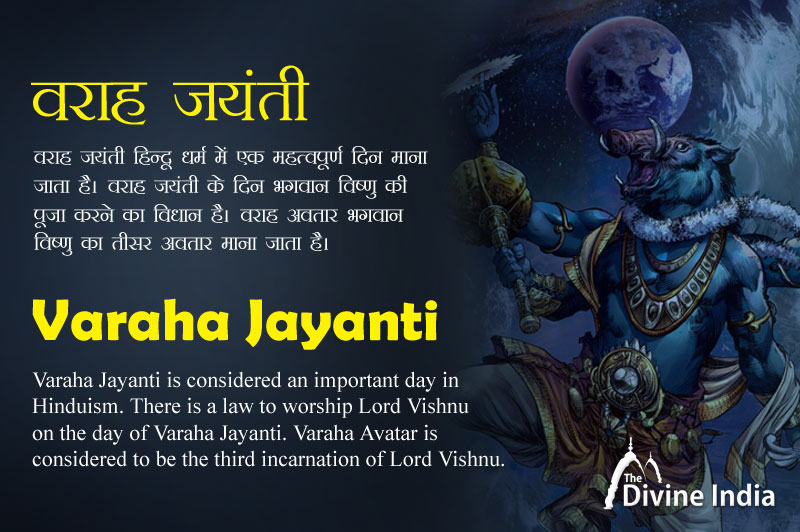 The fear of ghosts ends. Those who have scary dreams, they must worship on this day. Ghost-obstacles are destroyed. Wishes are fulfilled. Enemies are conquered. The effect of someone's tantra-mantra or mischief is destroyed. Increase in wealth and prosperity. One gets freedom from the sins acquired in this birth and previous birth.

After bathing the idol of Lord Varaha with Ganges water, offer bhog and perform aarti with incense, lamp, naivedya, sandalwood and donate food to Brahmins. After telling or hearing the story of killing Hiranyaksha, feed the Brahmin and give dakshina. Varaha Stotra and Varaha Kavach should be recited on this day. The effect of this fast gives desired results.

According to legend, Diti, the wife of Maharishi Kashyap, gave birth to two sons named Hiranyaksha and Hiranyakashipu. Both of them were demons and they took the form of an adult as soon as they were born. As soon as he was born, strange movements started happening in the world. Hiranyaksha and Hiranyakashipu were both very powerful. And by doing penance to Lord Brahma, by pleasing him, he obtained a boon from him.

After receiving a boon from Brahma, both of them became autocratic. In pride of his power, he started insulting God and the gods. Hiranyaksha attacked Devlok and subdued it. Then Hiranyaksha took the earth and hid it in the abyss. By doing this there was upheaval in the universe. The gods then sought help from Lord Vishnu.

Lord Vishnu then took the form of Varaha, lifted the earth on his teeth, pulled it out of the abyss, and placed it in his orbit. Seeing this, Hiranyaksha got furious with anger. He challenged Lord Varaha to battle. Lord Vishnu taking Varaha avatar defeated that arrogant demon in battle and killed him. It is believed that both the demon brothers Hiranyaksha and Hiranyakashipu were the gatekeepers of Lord Vishnu in their previous birth, and due to the curse of a sage, they had to take birth in the demon vagina. Therefore, for their salvation, Lord Vishnu took the incarnation of Varaha and freed him from the demon vagina.