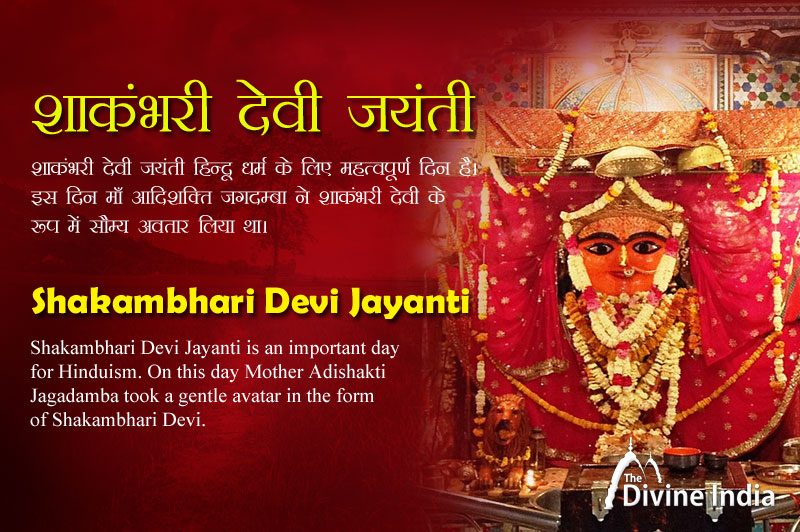 Shakambhari Devi Jayanti is an important day for Hinduism. On this day Mother Adishakti Jagadamba took a gentle avatar in the form of Shakambhari Devi. It is believed that Goddess Bhagwati incarnated as Shakambhari to alleviate famine and severe food crisis on the earth. As is known from his name which means – 'Shaak' which means 'vegetable and vegetarian food' and 'Bhari' means 'holder'. Hence also known as goddess of vegetables, fruits and green leaves and she is depicted with green surroundings of fruits and vegetables. Shakambhari Devi is also depicted as having four arms and eight arms at some places. Maa Shakambhari is called Raktdantika, Chinnamastika, Bhimadevi, Bhramari and Sri Kanakadurga.

There are many Peeths in the country of Mother Shri Shakambhari. But the Shaktipeeth is the only one which is in the mountainous part of Saharanpur. This temple is one of the most visited temples of North India and the second most famous temple in North India after Vaishno Devi. Among the nine goddesses of North India, Shakambhari Devi is considered to be the ninth and last darshan. Among the nine goddesses, the form of Maa Shakambhari Devi is the most compassionate and loving mother.

The story of the incarnation of Shakambhari Devi

According to Devi Purana, Shiva Purana and religious texts, there was a Mahadaitya Ruru in the lineage of Hiranyaksha. Ruru had a son named Durgamasura. Durgamasura did the penance of Brahma ji and subjugated the four Vedas. With the absence of the Vedas, all the activities disappeared. Brahmins gave up their religion. There was an all-out outcry. Due to the Brahmins becoming devoid of religion, the rituals of sacrifice were stopped and the power of the deities also began to diminish. Due to which there was a severe famine. No animal was getting water. Due to the lack of water, the vegetation also dried up, due to which all the creatures started dying due to hunger and thirst. Durgamasur had a fierce battle with the gods in which the gods were defeated, so the deities suffering from the atrocities of Durgamasur hid in the Shivalik ranges and started meditating, chanting, worshiping and praising Jagadamba. On the praise of Jagadamba by him, Mahamaya Maa Parvati, who is famous by the names Maheshani, Bhuvaneshwari, appeared in the form of Ionija at the place of Saharanpur Shakti Peeth. Jagdamba was very sad to see the plight of the whole creation and tears started flowing from his eyes. All the rivers and ponds were filled with water by the stream of tears. At that time the deities worshiped the mother in the name of Shatakshi Devi. Shatakshi Devi assumed a divine benign form. Mata Chaturbhuji was seated on Kamalasana. In her hands she was holding a lotus, arrow, herb and fruit and a splendid bow. Bhagwati Parameshwari manifested many herbs from her body. By eating them, the world's appetites were pacified. When the mother looked at the mountain, first a tuber named Saral was born. In this divine form, the mother was worshiped in the name of Shakambhari Devi.

After that she took a beautiful form to woo Durgamasur and sat on the Shivalik hill. When the Asuras saw Jagadamba sitting on the hill, they came with the thought of catching her. Durgamasur himself also came, then the goddess made a circle outside the earth and heaven and herself stood outside it. Devi had a fierce battle with Durgamasur, in the end Durgamasur was killed. At this place, Mother Jagdamba killed Durgamasur and other demons and blessed the devotee Bhuredev (a form of Bhairav) with immortality. Go for the darshan of Shakambhari Devi. The place where Mata killed the demon Durgamasur is now the ground of Virkhet. Where the mother had made a beautiful form and sat on the crest of the hill, there is the temple of Goddess Shakambhari. There is a temple of Baba Bhuradev at the place where Mother gave the boon of immortality to Bhura Dev. This area, full of natural beauty and green valley, fascinates the worshiper. According to Devi Purana, Shatakshi, Shakambhari and Durga are the names of the same goddess.

Devotional Materials/Ved and Puran
The Vedas