Grahan Yoga or Dosha and Remedy 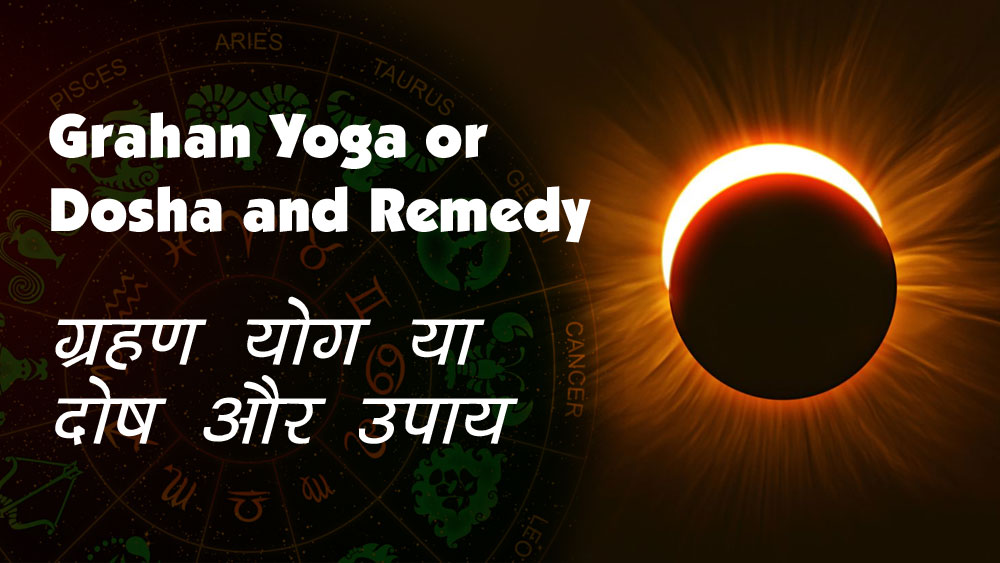 This defect is created when the Sun or Moon pair with Rahu or Ketu. In the state of lunar eclipse and solar eclipse defect the native feels fear and nervousness. Irritability becomes part of his nature. Mother's happiness decreases. After starting any work, always leave it incomplete and think about new work are the symptoms of this yoga. In my short experience of 10 years, I have seen many such horoscopes in which this yoga was being formed and the people were suffering from some phobia or some kind of fear. People who always have this fear in their mind, for example, understand that "If I go to Manali or Shimla on the wheels, the bus will turn around. If I go there by train, there will be a bomb explosion in the train." All such negative thoughts come to mind due to this defect. Generally, any type of phobia or any mental illness such as depression, sijrfenia, etc. are believed to be due to the effect of this defect, if the moon becomes more polluted here or if other sins also occur under the influence, then epilepsy, dizziness and complete There is also the fear of losing mental balance. The eclipse yoga created by the Sun decreases the father's happiness. The person's physical structure remains weak. It is responsible for diseases related to eyes and heart. Government job is either not available or it is difficult to keep it, the departmental inquiry, punishment, jail, obstruction of promotion are all the result of this defect.

It is not necessary that by applying thousands of rupees, by doing heavy measures, we can do measures by worshiping the planets or God, as nowadays astrology says. But even by taking small measures, we can please God and the planets. It is essential to have true reverence in that remedy and faith in God the Father. We can make them strong in our own horoscope by taking these measures for the sun god and also for the moon god.

In the eclipse defect made from the Sun or when the Sun God is weak in the horoscope, we should offer Arithya to the Sun God on that day, put a little good, Kumkum and Kaner flowers or any red color flowers and this mantra to the Sun God

"Om Hran Hrim Hruns: Surya Namah" chant Arghya. Apart from this, the recitation of the very ancient and well-known Aditya Heart Stotra is considered to be very important and paramount for worshiping the Sun God and it makes its impact in the Jataka soon.

The best remedy for lunar eclipse dosha created by the Moon and Rahu or Ketu is to worship Lord Shiva and anoint him with raw milk from water on the last day, because Moon Shiva is seated in the Lord's shoes and Lord Shiva Worship brings great happiness. Apart from this, make the yantra of the moon god a place of worship in the house and at the time of your worship (morning and evening) the yantra should also be worshiped with incense lamps.

Things to do during eclipse

Solar eclipse is a good time to take a new mantra and repeat the mantra that has been adopted. Mantra-siddhi is attained by chanting the mantra taken earlier during the eclipse period.

Even though all the water during the eclipse is like the Ganges, but bathing in running water, lake, river, Mahanadi, Ganga is progressively better and more beneficial than bathing in hot or cold water at home.