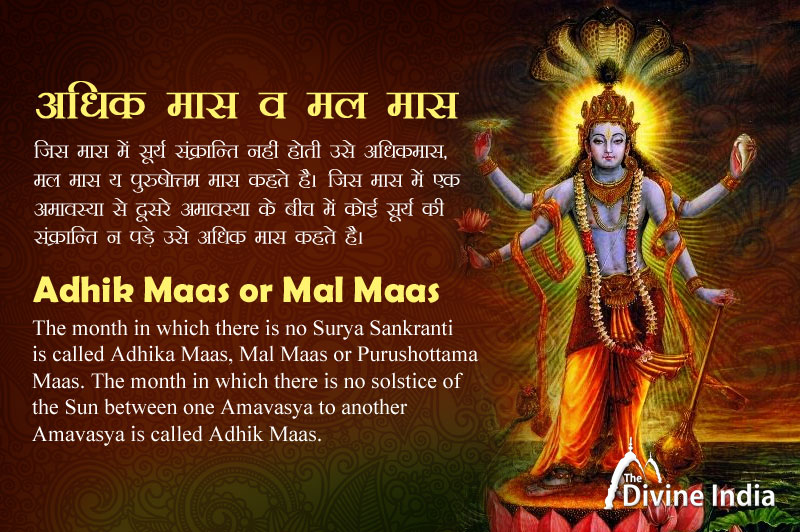 The month in which there is no Surya Sankranti is called Adhika Maas, Adhimas, Londa Maas, Malmas or Purushottama Maas. To understand this in simple words, the month in which there is no solstice of the Sun between one Amavasya to another Amavasya is called Adhik Maas. Sankranti means the entry of the Sun from one zodiac to another. Adhik Maas comes with a difference of 32 months, 16 days and 6 hours.

It is another fact that the solar year is of 365 days and about 06 minutes and the lunar year is of 354 days. Thus there is an interval of 11 days, 1 hour, 31 minutes and 12 seconds in both solar and lunar years. As this difference widens every year, it goes from three years to one month. Which is called Adhik Maas.

Why is the Malmaas called Purushottam Maas?

Lord Vishnu himself is the lord of Adhikmas. Because every month has a deity as its ruler. But Adhikmas had no ruler. Due to this, there was a lot of condemnation of Adhikmaas, then Adhikmasa went to the shelter of Lord Vishnu. Lord Vishnu said - "I make this above all equal to myself. I have handed over to this month all the qualities of virtue, fame, influence, sagaishvarya, might, ability to grant boons to devotees, etc.

Fruit of worship in adhik Maas

The fruit of doing charity in this month is renewable. If charity is not possible, then the service of Brahmins and saints is considered best. Money spent in charity does not diminish. It keeps on increasing progressively. Just as a huge tree is born from a small butt seed, similarly the donation made in the month of Mal proves to be eternally fruitful.

Which works are prohibited in Adhik Maas?

All the work done with the desire to get fruits in the month is prohibited. Ordinary religious rites like naming, yagyopaveet, marriage, griha pravesh, purchase of new valuables etc. are not performed.