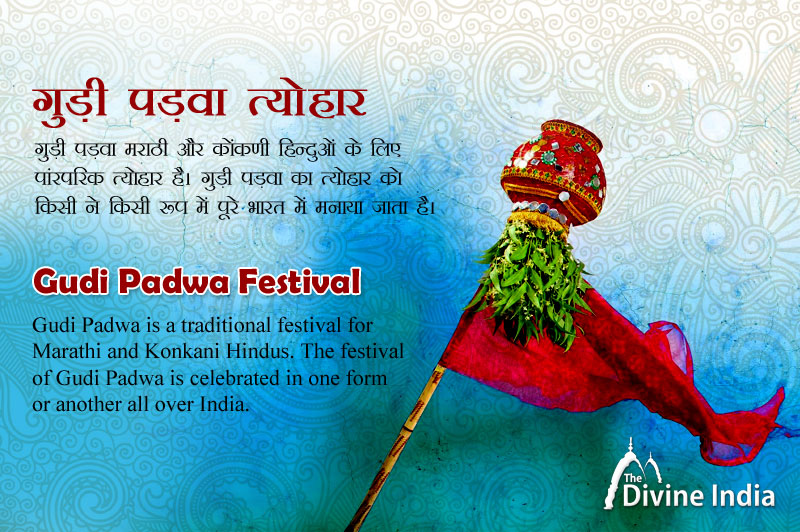 Gudi Padwa is considered to be the beginning of the Hindu New Year.

Gudi Padwa marks the arrival of spring and the harvesting of Rabi crops. This festival is associated with the mythological day that Lord Brahma created the universe on this day. In this, not only Brahmaji and the main gods and goddesses of the creation created by him, Yaksha-demons, Gandharvas, sages, rivers, mountains, animals-birds and insects, diseases and their remedies are also worshiped. . New Samvatsara starts from this day. Hence this date is also called 'Nav Samvatsara'.

In Andhra Pradesh, Karnataka and Maharashtra, all the houses are decorated with turbans from the leaves of the mango tree. Along with the desire for a happy life, this bandanavar is also a sign of prosperity, and a good harvest. Panchang is prepared on the day of 'Ugadi'. The great mathematician Bhaskaracharya composed the 'Panchang', calculating the day, month and year from sunrise to sunset from this day.

A potter's boy named Shalivahan created an army of clay soldiers and by sprinkling water on them breathed life into them and with the help of this army defeated the mighty enemies. Shalivahana Saka started as a symbol of this victory.

It is believed that on this day Lord Rama liberated the people of the south from the tyrannical rule of Vanaraja Bali. The people who were freed from the troubles of Bali hoisted the flag after celebrating from house to house. Even today the practice of erecting Gudi in the courtyard of the house is prevalent in Maharashtra. That is why this day was named as Gudipadwa.

Gudi Padava festival in other states

Gudi is known as Pandava in Maharashtra. Hindu Konkani of Goa, Ugadi in Andhra Pradesh, Telangana state and known as Navreh among Kashmiri Pandits. In Bengal this occasion is celebrated as Naba Barsa, in Assam as Bihu, in Kerala as Vishu, in Tamil Nadu as Putuhandu. It is considered the most auspicious day of the year. This festival is celebrated not only in India but also in Nepal, Burma, Cambodia and other countries.