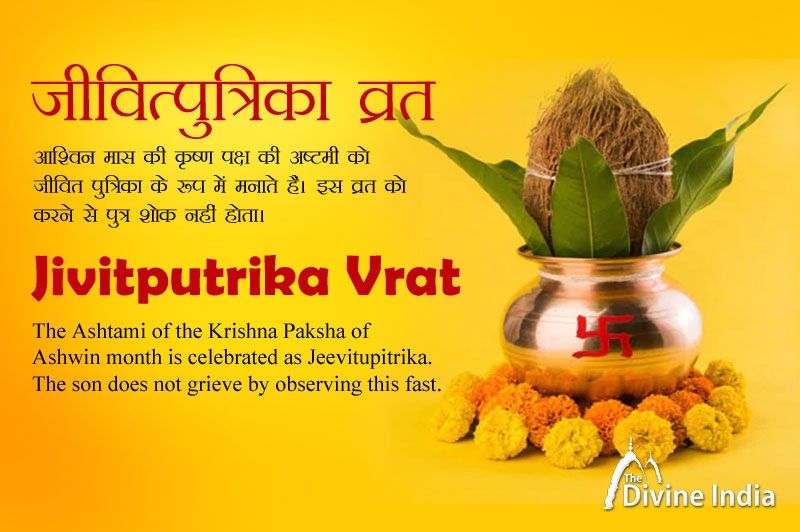 Jivitputrika Vrat is a very important fasting day. The Ashtami of the Krishna Paksha of Ashwin month is celebrated as Jivitputrika. The son does not grieve by observing this fast. Women of this fast are very important in the society. In Jeevaputrika fast, mothers fast for the whole day and all night for the safety and health of their children.

This fast is mainly observed in Bihar, Jharkhand and Uttar Pradesh, India. In Nepal, the Jivaniputrika Vrat is popular as Jitiya fast.

After bathing yourself, bathe the idol of Lord Surya Narayana. Perform aarti with incense, lamp etc. and offer bhog. On this day, a mixed substance with millet is used as an offering.

In this fast, the mothers begin fasting by eating food and water on Saptami and fasting on Ashtami throughout the day and end the fast on Navami.

There are many stories related to the Jeevatiputrika Vrat. These are as follows -

It is believed. In the Mahabharata, Ashwathama killed the child in Uttara's womb, using the Brahma weapon to avenge his humiliation. Then Lord Krishna micro-entered the womb of Uttara and protected the child. Uttara gave birth to a son. The same son became the future captain of the Pandava dynasty. This fast got the name 'Jeevaputrika' due to Parikshit getting such a life.

The story of Jemutavahana is associated with the Jivaputrika-vrat which is very popular.

The prince of the Gandharvas was named Jeemutavahana. He was very generous and benevolent. Jemutavahana's father made him sit on the throne while going to the Vanaprastha Ashram in old age, but he did not feel like in the royal palace. Leaving the burden of the kingdom on his brothers, he himself went to the forest to serve his father.

In the forest, Jemutavahana was married to a Rajakanya named Malayavati. One day while traveling in the forest, Jeemutavahana went far ahead, then he was seen mourning an old lady. On their asking, the old woman wept and said - I am a woman of Nagavansh and I have only one son. The pagans have pledged to hand them a serpent for daily consumption in front of Pachiraj Garud. Today is the day of the sacrifice of my son Shankhchud.

Jemutavahana assured the old lady, "Don't be afraid, I will protect your son's life." Today instead of myself I will cover myself in his red cloth and lie down on the rock. Having said this, Jemutavahana took the red cloth from Shankhchud's hand and they wrapped it and lay down on the vaidha-rock chosen to sacrifice Garuda. At the appointed time, the Garuds came with great speed and they caught the Jeemutavahana covered in red cloth in a claw and sat on the top of the hill. Garudji was stunned to see a tear in the eye of the arrested creature in his clutches and not seeing a sigh coming out of his mouth. He asked Jemutavahana to introduce him. Jemutavahana told the whole story. Garud ji was greatly impressed by his bravery and courage to sacrifice himself to protect the life of another. Pleased, Garuda Ji gave him life-giving and also gave him the boon of not taking the sacrifices of the serpents. Thus, the indomitable courage of the Jemutavahana protected the Naga caste and since then the practice of worshiping the Jemutavahana for the protection of the son started.

During the Pradosh period of Ashwin Krishna Ashtami, daughter-in-law women worship the Jemutavahana. Lord Shankar narrates the story to Goddess Parvati on Mount Kailash, saying that by fasting on the day of Ashwin Krishna Ashtami, a woman who worships Jemutavahana in the evening and gives alms to Acharya after listening to the story, she gets full happiness of son and grandson. Does. The fast is passed after the end of Ashtami Tithi on the second day. This fast is going to give fruits according to its name.