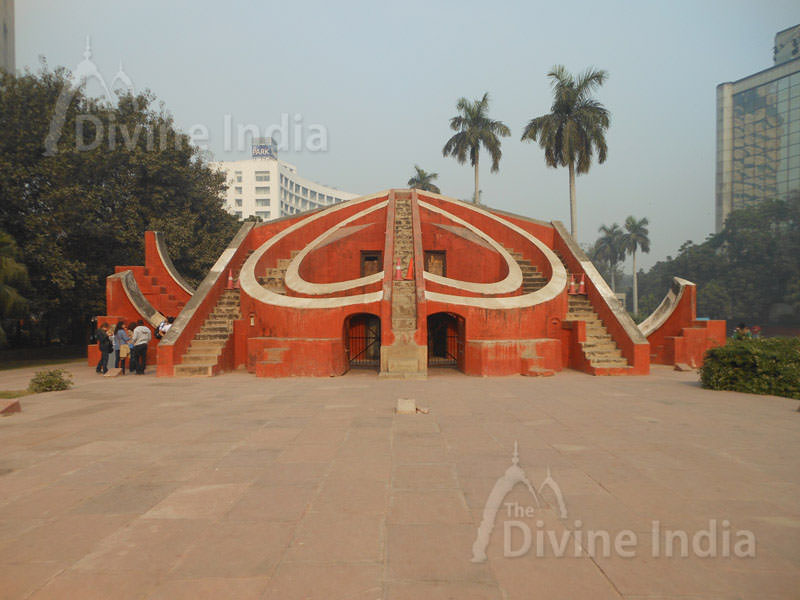 Jantra Mantra is located at Parliament Street, Connought Place. Jantra Mantra or Yantra Mantra which means 'instruments with formula' is an astronomical masterpiece of Indian architecture which shows the scientific acumen of ancient India.

Jantra Mantra consists of 13 astronomical instruments and is one of five built by Maharaja Jai Singh ii of Jaipur between 1724 and 1734 as he was given a task by mughal emperor Muhammad Shah to revise annual calender and astronomical tables. The predictions were done by studying the movements of Sun, Moon and other planetary bodies.

Jantra mantra has four distinct instruments within the observatory: The Samrat Yantra, The Ram Yantra, The Jayaprakash Yantra and The Mishra Yantra.

The Samrat Yantra is a giant triangle that represents an equal hour sun dial measuring 70 feet in height, 114 feet long at the base and 10 feet thick. It has a hypotenuse of 128 feet which is parallel to the earth's axis and point towards north pole. On either side of the hypotenuse is a quadrant with graduations indicating hours, minutes and seconds. It was a tool for measuring declination and other related coordinates of various heavenly bodies.

The Jayaprakash Yantra consists of hollowed out hemispheres with concave surfaces having markings inscribed on them.

The Ram Yantra is another instrument which means the observer could sit inside and align the instrument with the position of the stars using various markings.

The Mishra Yantra was used to depict the time of noon of various cities across the world and was the only structure in the observatory not invented by Jai Singh II . The Jantar Mantar observatory is well maintained by the Government of Delhi and attracts tourists from the entire globe.