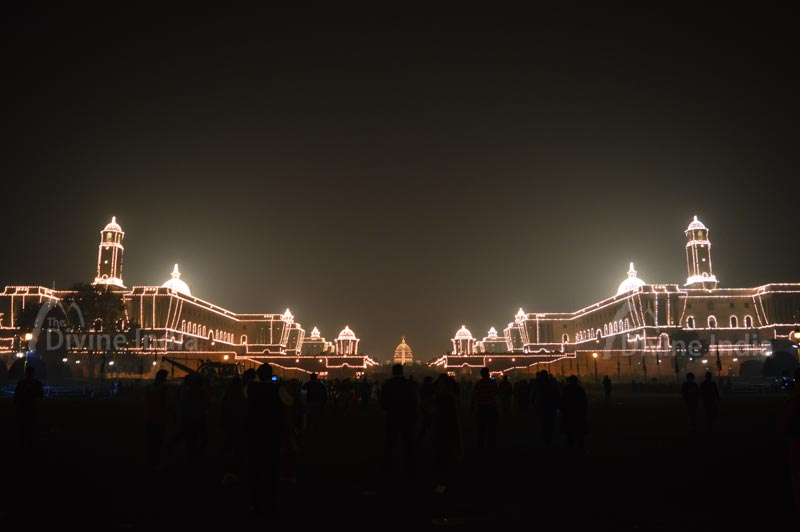 The Rashtrapati Bhawan or the 'President's House or the 'Presidential Palace’ is one the monuments of Delhi. This palace’s Imperial architecture was inspired by Lutyens' and Baker's and was made to be the residence of the Viceroy and Governor General of India during the British Rule.  The Rashtrapati Bhawan is the official home of the president located at the Western end of Raj path in New Delhi, India. It includes 340-room main building, that has the president's official residence, halls, guest rooms and offices; and also refer to the entire 130-hectare (320 acre) President Estate that additionally includes huge presidential gardens (Mughal Gardens), large open spaces, residences of bodyguards and staff, stables, other offices and utilities within its perimeter walls.

Rashtrapati Bhavan, home to the President of the world’s largest democracy, epitomizes India’s strength, its democratic traditions and secular character. It was completed in the year 1929. Initially it was called Government House on August 15, 1947 when India became independent and later changed to Rashtrapati Bhavan during the term of President Dr. Rajendra Prasad.

The splendor of the Rashtrapati Bhavan is multi-dimensional. It is one of the vast mansions and its architecture is breathtaking. This building gave the impression of the setting of a perpetual Durbar. The perpetual Durbar was transformed to be the permanent institution of democracy on 26th January 1950 when Dr. Rajendra Prasad became the first President of India and occupied this building to preserve, protect and defend the Constitution of India. The initial amount of the building was 400,000 pounds but raised its cost to 877,136 pounds (then 12.8 million). It was completed after long span of seventeen years which was scheduled to be completed in four years.

The most prominent and distinguishing aspect of Rashtrapati Bhavan is its dome which is superimposed on its structure. It is visible to every citizen from a distance because of its roof with a circular base in the heart of Delhi.The whole of Rashtrapati Bhavan embodies in it Indian architectural patterns such as Buddhist railings, chhajjas, chhatris and jaalis as it was inspired by Stupa at Sanchi. Another important feature of the architecture of the Bhavan is the use of Indian temple bells in its pillars.It is believed that the idea to adopt such bells in the pillars came from a Jain temple at Moodabidri in Karnataka.