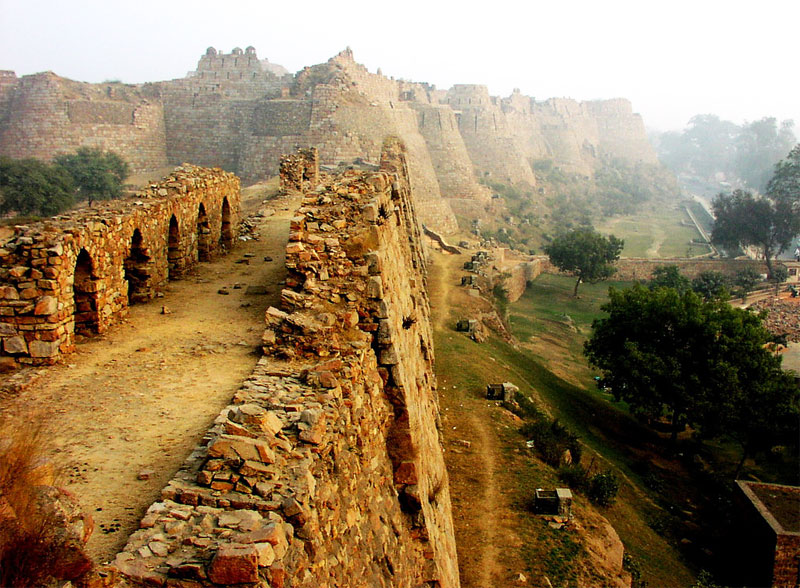 The Delhi Tughlaqabad fort is one of the largest forts around India.Tughlaqabad Fort is renowned for the prescriptions due to which it remains abandoned from ages and one of the important monuments of Delhi. It's situated on the southern outskirts of the Capital. Tughlaqabad was a magnificent fort built by Ghiyasuddin Tughlaq in 1324.The fort served as the capital for the king and provided protection from enemy attacks. It contained a vast number of buildings, mosques, palaces, towers, tanks surrounded by mammoth bastions.

It is a tale of a slave named Ghazi Malik, who served Sultan Mubarak Khilji of the Khilji dynasty. He suggested that the Sultan should build a massive Fortress on the southern region of Delhi. The Sultan jokingly commented that Ghazi can build one when he becomes the Sultan and destiny smiled upon this slave. The Sultan's own words came true and Ghazi drove away the entire Khilji Dynasty from Delhi. He conquered over the city as the new Emperor and re-christened himself as Ghiyaas-Ud-Din Tughlaq.

Tughlaqabad’ is the ruined Fort located in the South Delhi on the Mehrauli-Badarpur road. The fort is almost 6 kms long. Nearest Metro Station is Govindpuri, on Violet Line (Badarpur track).This Fort was his dream project therefore he abducted every labor of Delhi for the fort’s construction. The fort was under the curse of a mystic ‘Sufi Saint NizamuddinAuliya’ as Tughlaq abducted every labor who were digging a ‘Baoli’ (Well) for public welfare under the command of a saint. He kidnapped them and in fury saint curses the whole fort that it will never flourish and will be destroyed. The curse spread its charm and it remained un-flourished till date.

The fort is pentagon in shape and is guarded with parapet walls that support massive cone-shaped bastions at every intersection. The walls of the fort are 11.75 meters high. Within its sky-touching walls, double-storied bastions, and gigantic towers were housed grand palaces, splendid mosques, and audience halls. Ghiyas-ud-din builds a capital that was strong enough to repulse Mongol attacks and provide security to its citizens. The style of the tomb conforms to the Indo-Islamic style of architecture. The fort opened on all days of the week from 9 a.m. to 5 p.m.

The fort has giant stairs after the entrance. The visitors had to walk the stairs to reach the top of the fort. After stair case there goes into the mausoleum which is on the other side of the road and the remains of Ghiyas-ud-din Tughlaq, his wife, Begam Makhdima Jehan, and his son and later Sultan, Muhammad bin Tughlaq are there. Tughluqabad is divided into three parts:

The Fort is now, under Delhi government and allowed for public touring purpose.

Blog/Hinduism
What are the duties of the devotees of Shri Ganesha?