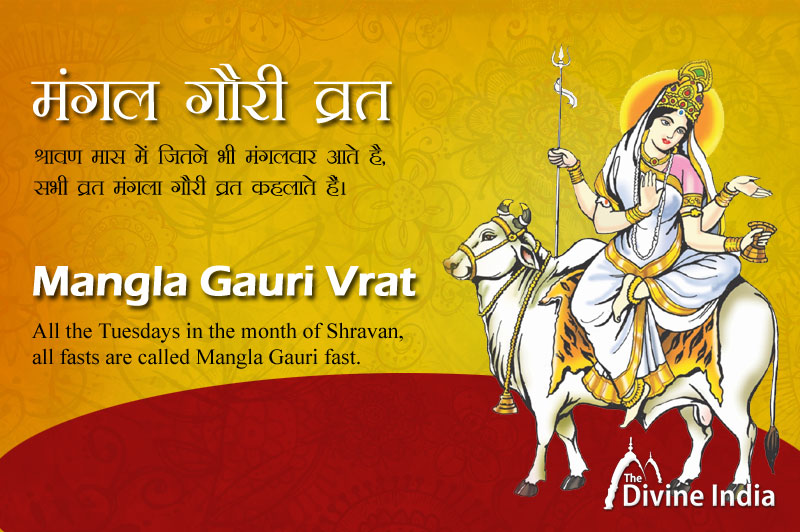 In the morning, a white wash cloth should be spread on a checkpoint after taking a bath. Nine planets are made out of rice on white cloth and on red cloth, wheat is made of hexade mata. Put rice and flowers on one side of the chaki and establish the urn. Keep water in the urn. Four lamps of 16-16 wire are burnt by making a chamukhi lamp of flour. First of all, we worship Ganesha. After worshiping, offer water, roli, molly, sandalwood, vermilion, betel nut, cloves, betel leaf, rice, flowers, cardamom, bell-leaf, fruit, nuts and dakshina. After this, the Kalash is worshiped like Ganesh worship. Then by worshiping the nine planets and the Shodash Mata, they give the whole offering to the Brahmin. After this, making Mangala Gauri of the soil, bathing them with water, milk, curd etc., and wearing clothes, applying Roli, Chandan, Sindoor, rosemary and kajal. Sixteen types of flower leaves are garlanded. Five types of sixteen-sixteen nuts, betel nuts, cloves, rosemary, glass, comb and bangles are offered. Hearing the story, touching Sasuji's feet is a law to eat one grain at a time. The next day Mangla dines after immersing Gauri.

A story related to Mangala Gauri fast is also told, according to which a seth named Dharmapala is living happily with his wife in a city in the Oriental period. There was no lack of wealth in his life. But the only thing that bothered him was that he had no children. For which he used to do a lot of pooja recitation and charity. Pleased with his good deeds, by the grace of God, he received a son, but the son did not have much age, according to astrologers, his son will become a eraser of death due to snake bite in the sixteenth year.

Knowing the young age of his son, his father was very hurt but who can change the fate, Atru, Seth left everything to God and after some time married his son to a worthy cult girl. Mother's mother always worshiped the fast of Mangla Gauri. Atari, the girl born due to the effect of this fast was blessed with unbroken good luck, which resulted in the length of Seth's son.

It should be used after fasting on Tuesdays of Shravan month. Food is prohibited in industry. Worshiping with henna should be done. Worship should be done with four Brahmins. On the four corners of a checki, four clams of bananas should be tied on the pavilion with an odor. Mangalagouri should be set in the bowl by placing a bowl on the urn. All the items of saree, nath and suhag should be kept. Aarti should be done after listening to the story after the Havan. Sixteen laddus of flour, rupees and sari in silverware should be given to Sasu ji to touch his feet. The pandits who perform the puja should also be given food and washed and washed.

The next day, Sohal Brahmins should be given food including pairs, dhoti, angocha and Brahminis, suhag-pittari. In the Suhag plate, there are accessories and sarees of Suhag. After doing all this, you should eat yourself.