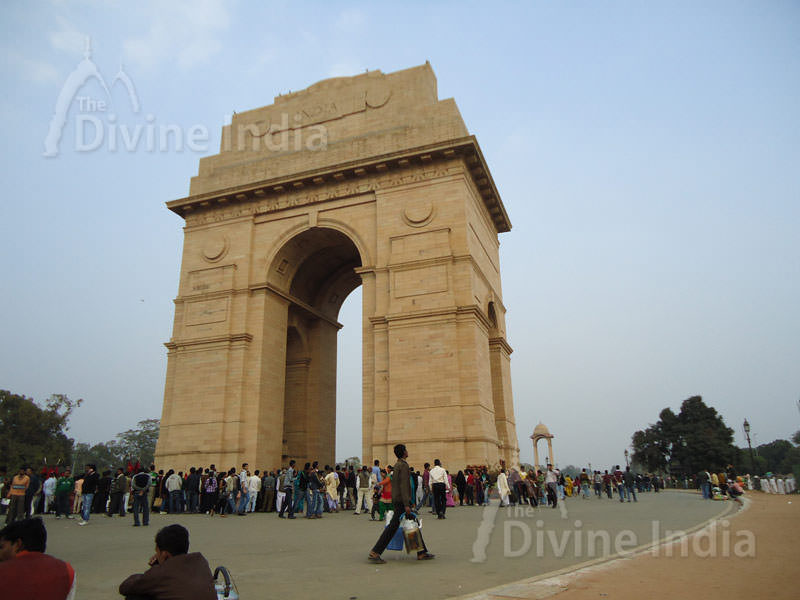 The India Gate or 'All India War Memorial' is the national monument of India and bears immense historical significance. It is situated on Rajpath in heart of Delhi. India Gate is inspired by 'Arc De Triomphe' in Paris, France. It pays tribute to the 90,000 Indian soldiers who sacrificed their lives during World War First and Anglo Afghan War of 1919.

India Gate is a 42-meter high gateway built in pale stone, red stone and granite. Sir Edwin Lutyen, the architect of Delhi, designed it. The foundation stone of India Gate was laid by Duke Of Connaught. The construction work was completed in February 1921.The monument was dedicated to the nation 10 years later by then viceroy, lord Irwin. Another memorial, Amar Jawan Jyoti or Flame Of The Immortal Soldier was added after India got independence. It was unveiled in 1971. The eternal flame burns day and night under the arc of India gate to remind the nation of soldiers who lost their lives in the Indo-Pak war of December 1971. The burning shrine is black marble cenotaph with a rifle placed on its barrel, crested by a soldier's helmet. Each face of the cenotaph has inscribed in gold the words "Amar Jawan". The then prime minister of India Mrs. Indira Gandhi paid homage on behalf of the whole nation on the eve of 23rd Republic Day, 26 January 1972. On each Republic Day, the prime minister pays homage to the soldiers along with heads of armed forces before joining the annual parade at the Rajpath. The three flags representing the 3 Indian military forces (army, navy and air force) are present just behind the India Gate.

India Gate is surrounded by large lush green lawns. It is one of the most popular tourist destination in Delhi for tourists and citizens of India.

Location Map of The India Gate