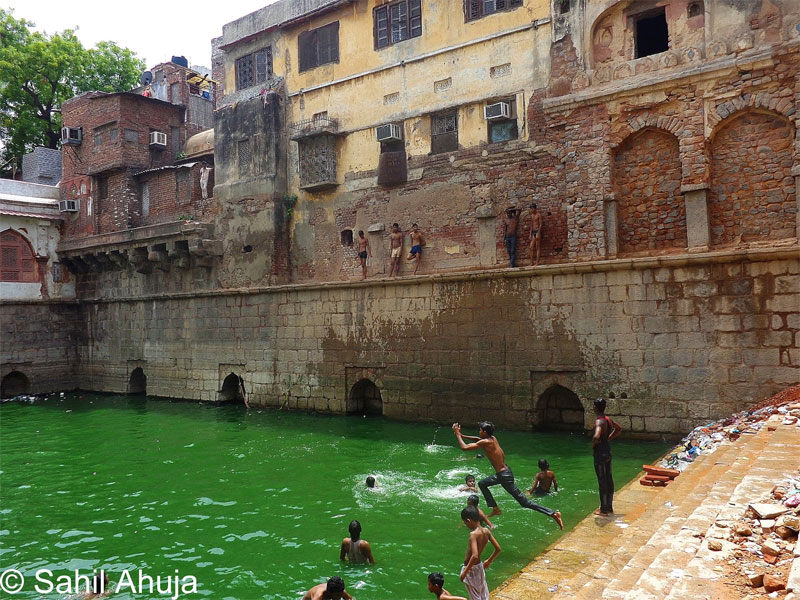 The Hazrat Nizamuddin Baoli is one of the few step wells left in Delhi and is one of active tourist spot of Delhi. Step wells are wells or ponds in which the water is reached by descending a set of steps. It is located at the entrance of the famous Hazrat Nizamuddin Auliya’s Dargah and also nearby is the renowned poet Amir Khusrao’s Dargah. This baoli was constructed over 800 years ago by Hazrat Nizamuddin Auliya himself in the year 1321-22. It is over 160 feet deep, surrounded by the typical 14th-century architecture, and small storeyed houses.

It is believed that Nizamuddin was building this baoli at the same time as Ghiyasuddin Tughlaq (the then ruler of Delhi) was building his fortress in Tughlaqabad. This infuriated the ruler and thus he forbidden Delhi laborers from working anywhere except Tughlaqabad. However, laborers were so devoted to Sufi saint that they started working at the baoli site at night. This further infuriated Tughlaq and the result he banned the sale of oil used in lighting lamps. It is believed that the construction of the baoli was completed under moonlight while some say that the holy water of the baoli was used instead of oil to light the lamps and that gives the birth to Nizamuddin baoli. The baoli is the largest in Delhi and the only step-well in Delhi that has never dried up in about 800 years.

The baoli can be approached via the JLN Stadium Metro Station (Violet line). The baoli is in the Nizamuddin west area of Delhi, which is easily accessible from Pragati Maidan. It opens on all days of week from sunrise to sunset. The baoli, though rectangular in outward appearance, has a stepped circular tank at its centre, with a depth of about 80 feet below the ground level. Its steps lead down into the water tank that is fed by underground streams. A marbled floor, from the dargah or tomb shrine, where qawwalis (musical performances) are played, leads to this stepwell. There is no stopping the kids who climb into these ancient tombs and structures and jump straight into the water tank.The area has been closed to visitor entry by means of a large iron gate with another small gate built into it.

In 2009, when conservation work at the Nizamuddin Baoli started in full swing, it was cleaned for the first time in hundreds of years.  After cleaning large amounts of waste and silted debris, several collapsed portions of the baoli were rebuilt. Today, this baoli is a protected monument under the Archaeological Survey of India and its conservation is taking place as part of the 'Humayun's Tomb-Sunder Nursery-Hazrat Nizamuddin Basti Urban Renewal project' under the Aga Khan Trust for Culture. Today the baoli, an integral part of the dargah, is a hub for social and religious activity.

Blog/Story
Power of Prayer - O Shri Krishna, You are Omniscient