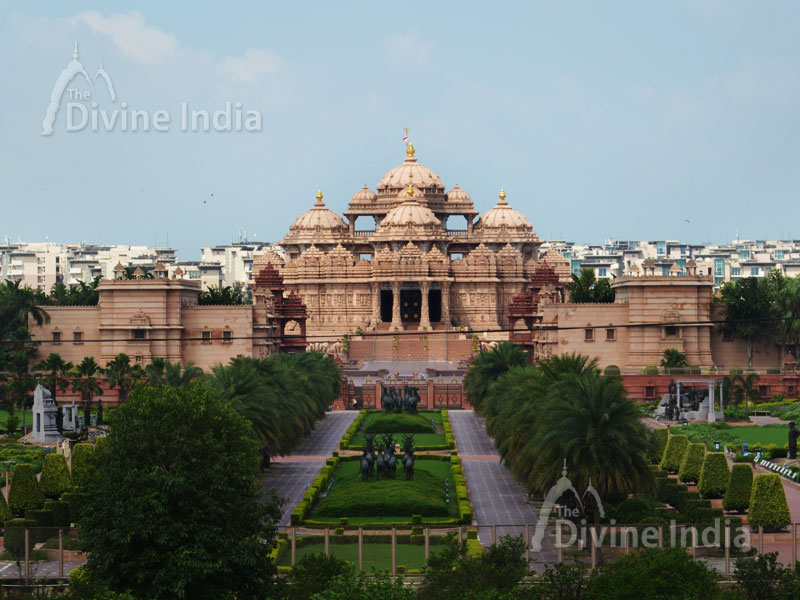 The complex was planned by Yogiji Maharaj since 1968, the spiritual head of the BAPS at that time. In 1971, Yogiji Maharaj died. In 1982, Pramukh Swami Maharaj, successor of Yogiji Maharaj as spiritual head of BAPS, started working towards fulfilling the dream of his guru and encouraged his devotees to look into the possibility of building the complex in Delhi. Pramukh Swami Maharaj, the 83 year old spiritual leader has over 11 lakh followers across the globe. In april 2000, the Delhi Development Authority and Uttar Pradesh government offered 60 acres and 30 acres of land for the project respectively. Construction work of temple began on 8th november 2000 and temple was officially opened on 6 november 2005. The construction work was completed in 4 years and 363 days. Over 6,000 tons of pink sandstone was brought from Rajasthan. The cost of construction of temple was 400 crores. Pramukh Swami Maharaj's 3,000 volunteers helped 7,000 craftmans to construct the temple.The temple was inaugurated by then president of India Dr. A.P.J Abdul Kalam, prime minister of India Mr. Manmohan Singh and leader of opposition Mr. L.K Advani in the presence of 25,000 guests on 6th november 2005.

The main monument at the centre of complex is built according to vastu shasthra and pancharatra shasthra. The monument is 141 foot high, 316 foot wide and 370 foot long and is covered top to bottom with engraved details of flora, fauna, dancers, and deities. In the monument, under the central dome lies a statue of Swaminarayan which is 11 foot high and made up of paanch daatu in accordance with hindu tradition. The other attractions of complex are three exhibition halls. The halls are sahajanand darshan, neelkanth darsdhan and sanskruti vihar. At sahajanand darshan, life of swaminarayan is displayed by robotics. The neelkanth darsdhan has a huge I-max theatre screening movie based on the life of lord and finally sanskruthi vihar takes visitors on a journey of Indian history in approximately 13 minutes in peacock shaped boats. Akshardham has become a place of education, experience and enlightment.

A 24 minutes hi-tech laser show named "Sahaj Anand" entertains the audience after sunset. A numbers of lasers, music, lights, projections, water, and live actors work together to depict the ancient story based on Kena Upnishad. Through the show, a message is sent to audience to live a spiritual life without any ego and pride. The show also convenes that the God almighty is the doer of everything and that the humans should live happier and peaceful life. The show was directed by French designer Yves Pepin. 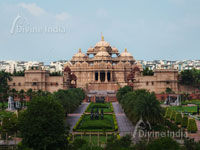 World's Greatest Place for All