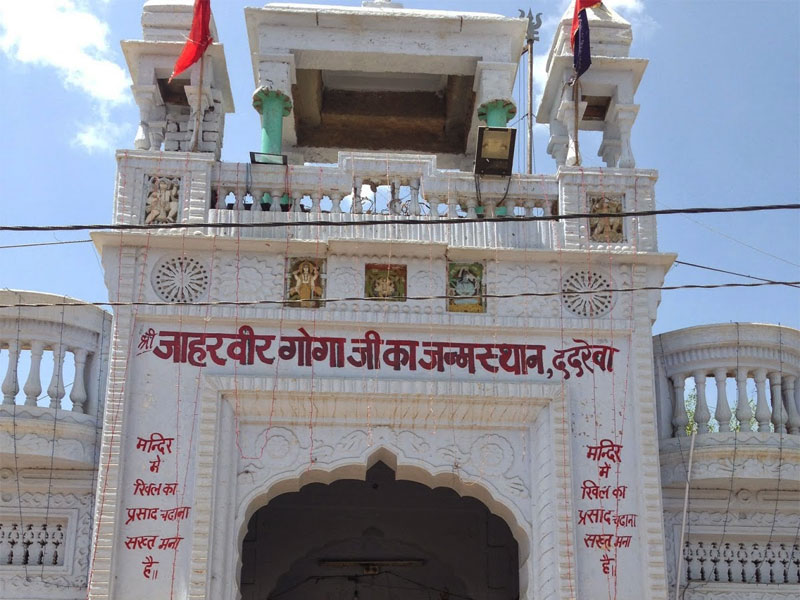 The temple of Gogaji is one of the popular temples of Rajasthan. The chief god of this temple is Gogaji Maharaj who is known as Jaharvir Gogaji. This temple is situated in Gogamadi city, district Hanumangarh, Rajasthan, India. Goga Maharaj is worshiped by people of all faiths. Every year, the fair is organized on the Navami of Bhadav Shuklpak, which is known as 'Gogaji Mela'. These days, devotees have to wait a long time in the long lines for the visit of Gogaji in the temple. It is believed that Gogaji was the ultimate disciple of Gurungkhnath ji.

In this temple idol of Lord Bhairav and Devi is worshiped with Lord Shiva and his family. Gorak Nathji's 'Dhunna' is considered part of today's worship. In this temple, there is a stone statue of Goddess Kalika which is made of stone and is located in a 3-feet-old asana. The statue of the goddess has an equal size black stone statue, which is of Bhairav ji. This temple also has a tomb of his family and other yogis.

It is believed that Gogaji was born with the blessing of Guru Gorakhnath, who gave the Gugal Fruit as Goga's mother Bachal in the form of prasad. Since Gugal's fruit was the reason for their birth, they were called Goga. Where as the devotee respectfully called him 'Gogaji'. Another belief is that he did his remarkable service to the village due to which Gogaji was said.

Here, completely secular temples can be seen, where all religions, sects, communities, castes come and see. Visitors from Punjab, Rajasthan, Haryana, Uttar Pradesh and Delhi come in the month of Bhadrapada. They first go to the place of Guru Gorakhnath, who was the teacher of Gogaji. After that, they go to the sacred place of Gogaji.

The Nath sect is very old. This sect had emerged as the improvement and purification of the systematic and proven practices, and with his hateful mysteries and rituals, Gorakh Nath chose for the first time. Gorakh Nath was a disciple of Matsyendra Nath. As an ancient sect, it should be preserved.

The rituals and customs of Nath Panth are followed here. There is no way in the temple, but there is an open check. The hall has also been constructed in the temple premises. Stores and other charitable work are organized by the people in Holi festival.