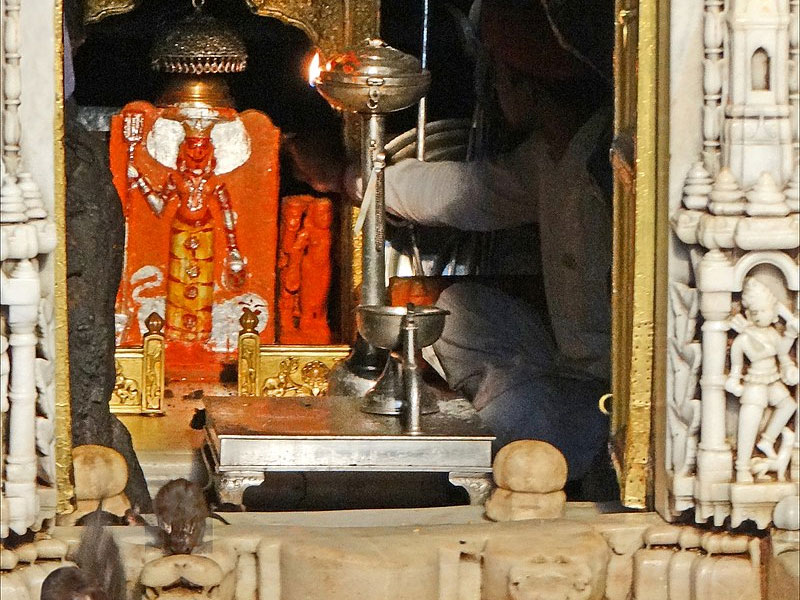 Karani Mata's temple is one of the famous temples of Hindus. This temple is situated in Bikaner district of Rajasthan and it is located in Deshnok, 30 kilometers south of Bikaner. This temple is fully devoted to the goddess Karani Mata and idol of the Karani Devi is established in the temple. It is believed that Karani Devi was the incarnation of Goddess Jagdamba. The devotees come from All over India and also come from foreign countries for the blessing of the Karni mata.

This temple of Karani Mata is also known from the temple of rats. There are about 20,000 mice in this holy temple. It is believed that if a devotee is seen white rats, then it is considered as special and auspicious. Due to so many mice in the temple, devotees are especially told that they do not move their steps, but they are drag on the ground to go ahead. Devotees like this, drag in steps and reach the idol of the Karani Mata.

Mice jump over the body of pilgrims, but do not harm anyone. In order to protect these rats from the eagle, vulture and other animals, there is a fine forged in the open places in the temple. Due to the presence of these rats, this temple of Shri Karni Devi is also famous as the name of the temple with rats.
People also come here to see the carving on the marble at the main entrance of the temple. The silver panes placed here for silver offerings, gold umbrellas and rats (kaba) are also worth seeing.

It is believed that the Karani Devi Sakthi Mata was the incarnation of Jagadamba. From now on, about six and a half hundred years ago, the place where this grand temple is, living in a cave, the mother worshiped her devoted god. This cave is still situated in the temple premises. When the mother was Jyotirlin (moksa), her idol was set up in this cave as per her wishes. It is said that the blessing of mother Karani was established in the state of Bikaner and Jodhpur.

All the festivals are celebrated in Karani Mata Mandir, especially in the festival of Durga Puja and Navaratri special puja is organized. On this day, the temple is decorated with flowers and lights. The spiritual atmosphere of the temple provides peace to the heart and mind of the devotees.