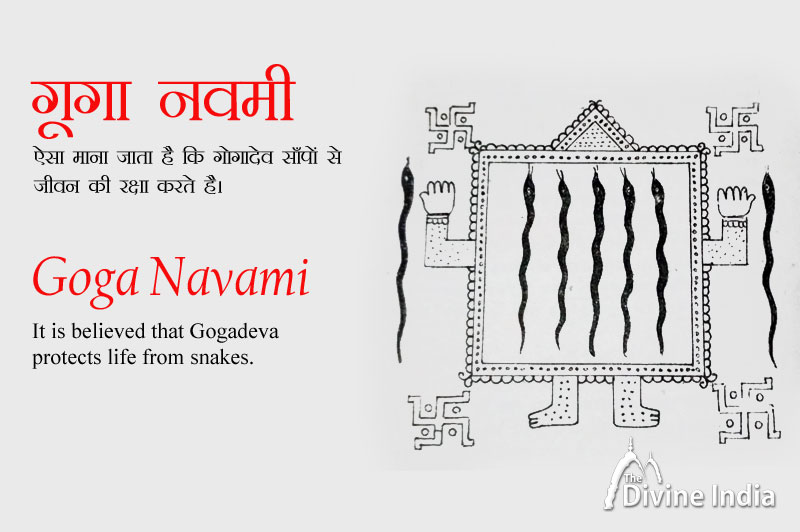 It is celebrated on the Navami of the Krishna Paksha of Bhadrapada. Gogadeva is worshiped on this day. Also known as Goga Navami. It is believed that Gogadeva protects life from snakes. The serpent deity is also worshiped in it. On the day of Goga Navami, by worshiping Jaharveer Goga Ji, Goga Ji Maharaj protects us from snake bites. On this day, along with the worship of Goga Jahar Veer, the serpent deity is also worshiped. This festival falls in the month of August and September.

Jaharveer Goga Ji is a popular deity in Northern India, who is worshiped with full devotion in Uttar Pradesh, Himachal Pradesh, Rajasthan, Haryana and Punjab. In Rajasthan, grand fairs are organized on Goga Navami and the festival lasts for three days. The Goga Navami Fair is the largest and popular in Hamirpur district of Himachal Pradesh.

On this day, after grinding it with ocher on the wall, grinding coal in milk, making a chakor house and making five serves in it. After this, water, raw milk, roli-rice, millet, flour, ghee, sugar should be offered on these snakes and the priest should be given alms.

Various worships and processions are organized on this day in the Guga Mari temples. On Goga Navami, Hindu devotees also tie a Rakhi or Raksha Stotra to Lord Goga as an assurance of protection from any injury or damage.

Women are fortunate to perform this fast. The husband is protected from adversity and the desire is fulfilled. Bahi vaccinates the brothers and feeds them sweets. In Badel, brothers give money to the sisters in power.