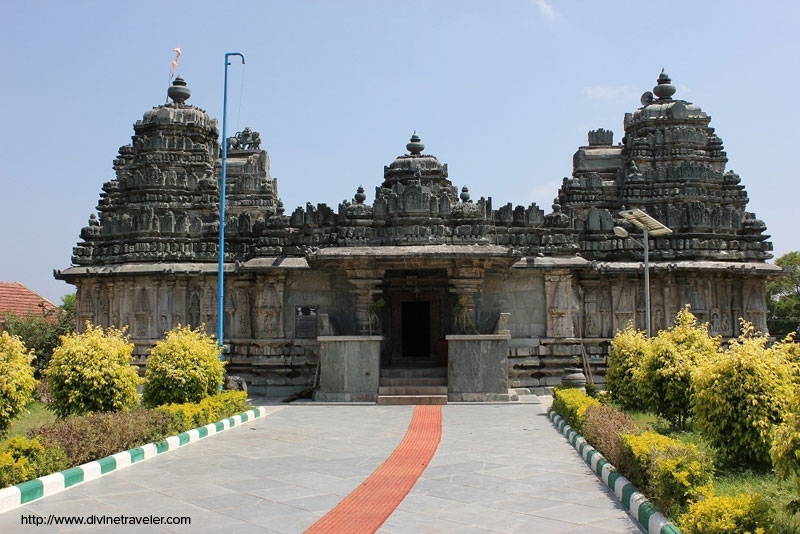 Goddess Parvati, wife of Lord Shiva is represented as Bhramaramba (Devi). The temple is enclosed by tall walls measuring 183 m (600 ft.) by 152 m (499 ft.) and 8.5 m (28 ft.) tall. Several sculptures are imprinted on the walls of the temple. The most modern and notable changes of the temple were made during the time of King Harihar of  Vijaya Nagar a period.

Shailkand is mentioned in the Sakandpurana. The temple description is also mentioned in it.  This shows the antiquity of the temple. Tamil saints in ancient times sung its praise of antiquity. It is said that when Adi Shankaracharya had visiting the temple, he laid the foundations of Shivnand Lahiri.

According to Shiva Purana, once the two sons of Lord Shankar Lord Ganesh and Lord Kartikeya started fighting each other for marriage. Kartikeya said that he is elder, so his marriage should be first, but Lord Ganesh wanted to get married earlier. To end the dispute Lord Shiva and Goddess Parvati came to a solution that the person, who will come back after turning around the whole earth seven times, they will be married first.By the time Lord Muruga could go round the world on his vahana, Lord Ganesh went round his parents 7 times (for according to Sastras, going in Parikrama round one's parents is equivalent to going once round the world, Boo- Parikrama) and became the first one to get married. Both the parents were delighted to see the cleverness of Lord Ganesh and made wedding usher before Kartikeya. At the time Swami Kartikeya came back after orbiting the whole earth, the marriage of Lord Ganesh was done with the Buddhi (intellect), and Siddhi  (spiritual power) of the daughters of Vishwa roop Prajapati. Not only this, Lord Ganesh had also got two sons named ‘kshem' and 'laabh'.

Devarsi Narada told the whole narrative of the Lord Kartikeya. Hearing the news of usher in marriage and benefit of sons to Lord Ganesh makes Lord Kartikeya angry. While annoyed by this episode, he followed the etiquette to bow his parents last time and walked from there.

Leaving his parents behind Lord Kartikeya went on the Kraunch Mountain. Goddess Parvati was distraught due to his son’s affection so she with Lord Shiva reached to Kartikeya. On seeing his father coming over to pacify him, he further went from there to three planes I.e., another 36 km. The departure of Kartikeya, made the Lord Shiva became the manifest in the form of Jyotirlinga on the mountain itself and later known as 'Mallikarjuna' jyotirlinga. Thus, collectively called 'Mallikarjuna' became famous in the world of the Jyotirlinga.