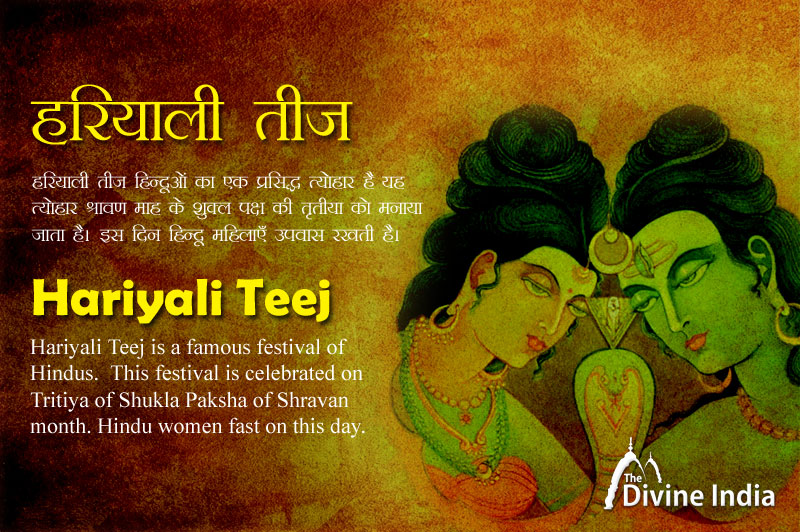 Hariyali Teej is a famous festival of Hindus. This festival is celebrated on Tritiya of Shukla Paksha of Shravan month. Hindu women fast on this day. It is especially celebrated in all the cities of northern India. Swings occur from house to house. The group of women sings folk songs. Beautiful dishes, gunjia, ghevar, fanny etc. are sent to Sindhara in Savan. It is of special importance to apply henna on this Teej. Women also put feet on the feet, which is considered a sign of Married. It is believed that Shiva and Parvati had a reunion on this day. On this day Hindu women worship Lord Shiva and Parvati. This day is also known as Chhoti Teej and Shravan Teej.

It is said that Lord Shiva gave this blessing at the behest of Goddess Parvati ji that if a virgin girl keeps this fast, then the obstacles in her marriage will be removed. On this day Lord Shiva granted Goddess Parvati the boon to accept her as his wife.

On this day, Rajputs wear red colored clothes in Rajasthan. The ride of Mata Parvati is taken out. During the reign of King Suraj Mal, Pathan kidnapped some women and took them on this day. Whom Raja Surajmal rescued and sacrificed himself. From the same day, the practice of wrestling started here.

On this day, women fast and listen to the story of Teeri Hariyali. Lord Shiva and Parvati are worshiped. Married women observe this fast because their husbands should be long and their family should have happiness.

It is believed that this story was told by Lord Shiva to remind Parvati ji about her past birth. The story goes like this--

Shiva says: O Parvati. A long time ago you did extreme tenacity on the Himalayas to get me as a groom. During this time you had to spend the day chewing dried leaves after giving up food and water. You meditated continuously, regardless of the weather. Seeing this situation of yours, your father was very sad and angry. In such a situation Naradji came to your house. read more...