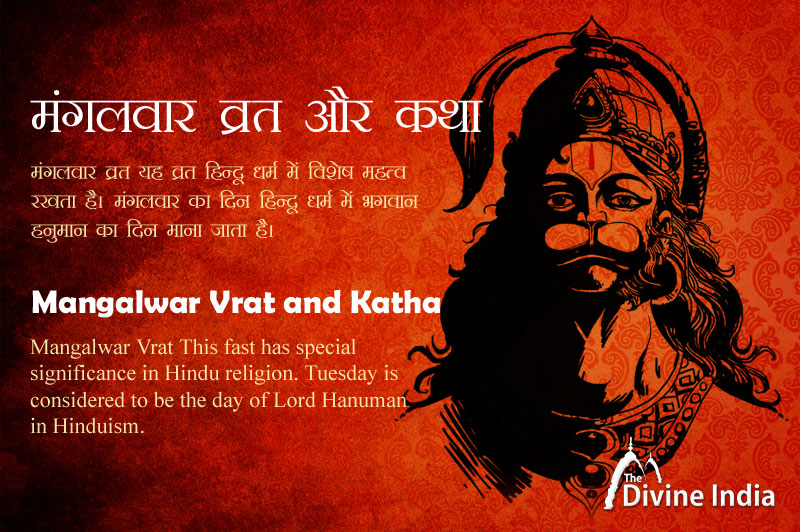 Mangalwar Vrat This fast has special significance in Hindu religion. Tuesday is considered to be the day of Lord Hanuman in Hinduism. Hanuman ji is worshiped on Tuesdays and fasting is observed. Tuesday's fast is observed to get the blessings and blessings of Hanuman. Hanuman protects everyone. It is believed that Lord Hanuman resides on earth in Kali Yuga and protects and blesses his devotees. It is believed that by observing the fast on Tuesday, there is no fear of ghosts and black forces. It is written in Hanuman Chalisa, “Tum Rakshak Kaahu ko Darna” i.e. whose savior you are, then whom is he afraid of.

Tuesday fasting is best for all happiness, blood disorders, state honor and children.

Wheat and jaggery should be eaten during this fast. It is okay to take food only once a day at night. Fast for 21 weeks. All the defects of a person are destroyed by fasting on Tuesday. At the time of worshiping the fast, offer red flowers and wear red clothes. In the end one should worship Hanuman ji and listen to the story of Tuesday.

A childless Brahmin couple were very sad. The Brahmin went to the forest to worship and started wishing Hanuman ji for a son. At home, his wife also used to fast on Tuesdays to get a son. On Tuesday, at the end of the fast, she used to offer food to Hanuman ji. Once on the day of the fast, the Brahmin could neither prepare food nor offer food. Then she vowed that after offering Bhog on the next Mars only, she would take food. After six days of hunger and thirst, she fainted till Tuesday. Hanuman ji was pleased to see his devotion and dedication. He appeared to her and told her that they were pleased with her and would give her a child, who would serve her. After this Hanuman ji disappeared after giving him a child. The brahmin became very pleased with this and named the boy Mangal. After some time when the Brahmin came home, seeing the boy, he asked who he was. The wife told the whole story. Knowing his wife's words deceitful, the Brahmin thought that his wife was an adulterous wife. One day, seeing the opportunity, the Brahmin dropped the child into the well, and the Brahmin panicked when his wife asked him at home. Mangal came smiling from behind. The Brahmin was astonished. At night Hanuman ji told him all the stories in his dream, so the Brahmin was very happy. Then the couple started living a life of bliss by keeping a fast on Mangal.