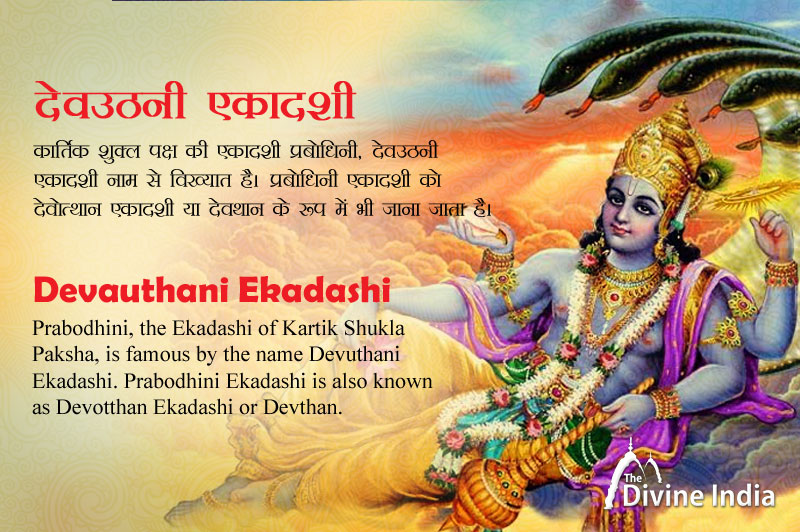 Prabodhini, the Ekadashi of Kartik Shukla Paksha, is famous by the name Devuthani Ekadashi. Prabodhini Ekadashi is also known as Devotthan Ekadashi or Devthan.

The fruit of Kartik Shukla Paksha Ekadashi fast is equal to the fruit of hundred Rajasuya Yajna and one thousand Ashwamedha Yajna. Performing Vratotsav on the day of Devotthan Ekadashi is the spiritual duty of every Sanatanadharmi. On this Ekadashi, devotees do whatever chanting and penance and bathing with reverence, and all that becomes auspicious. Lord Vishnu is worshiped on this day. By keeping the night awakening and fasting, all sins are destroyed and the fasting posthumously goes to Baikunth.

On the day of Devuthani Ekadashi, the fasting person should bathe in the morning and wear clean clothes. Clean the place of worship and make a check on the place of worship or in the courtyard and artistically mark the feet of Lord Shri Vishnu. If there is sunshine in your courtyard, cover the feet of Lord Shri Vishnu. Fast all day and can eat fruits etc. once a day.

In order to awaken Lord Vishnu from the Yoga-sleep of four months, amidst the auspicious sound of the bells, conch, mridang etc., these verses are awakened by reading -

After this, apply tilak, offer fruits etc. to Lord Vishnu, offer new clothes and enjoy sweet food. Listen to the story of Devauthani Ekadashi and perform aarti of Lord Vishnu.

Naradji asked Brahmaji to tell the fruits of Prabodhini Ekadashi fast. Brahma told in detail, O Narada! Once the Satyavada king Harishchandra has donated his kingdom to the sage Vishwamitra in a dream. The next day, when the sage Vishwamitra arrived in the court, the king handed over all his kingdom to him. The sage asked him for five hundred gold coins of Dakshina. To repay the dakshina, the king had to sell his wife and son and himself. The king was bought by a dom. Dom had appointed King Harish Chandra in the crematorium and with the relatives of the dead, entrusted the task of cremating the dead body. When many years passed while doing this work, one day he accidentally met Gautam Rishi. When the king told him all things past, Muni advised him to observe this fast (Prabodhini) Ekadashi.

The king started this fast. Meanwhile, his son Rohitash died due to snake bite. When his mother brought his son to the crematorium for the last rites, King Harishchandra asked him to do the cremation. But he had nothing to pay the cremation tax. He paid half the tax of the crematorium by giving away half of the chandari. Immediately the lightning flashed in the sky and the Lord appeared and said, 'Maharaj! You have presented the highest ideal by holding the truth in life. Blessed be your duty. You will remain immortal in the name of Satyavadi King Harishchandra in history. ”King of Harishchandra became alive with Bhagavatkripa. The three beings endured happiness for a long time and finally went to heaven.

Blog/Hinduism
What are the duties of the devotees of Shri Ganesha?