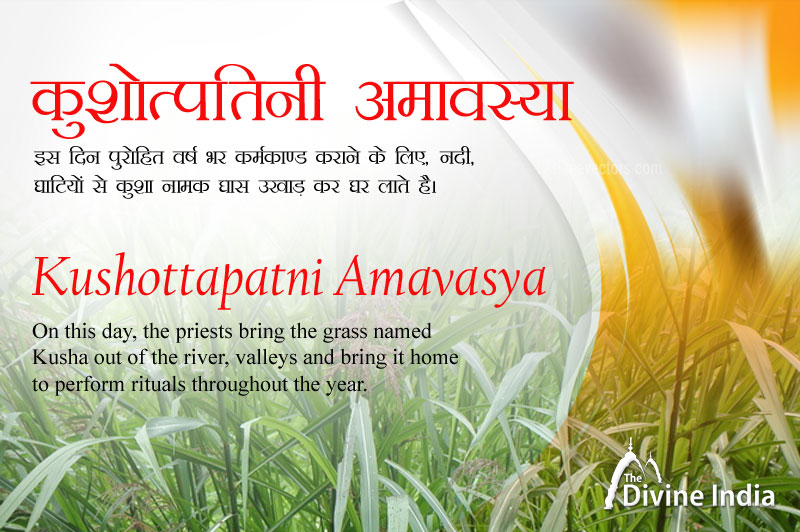 The Amavasya of the Krishna Paksha of Bhadrapada is called Kushotpatini Amavasya and Pithori Amavasya. On this day, the priests bring the grass named Kusha out of the river, valleys and bring it home to perform rituals throughout the year. Kusha grass is called Kansa in Uttarakhand. The scientific name of Kusha is called Eragrostis cynosuroides.

On Kushotpatini Amavasya, there are some rules for getting out of Kusha Grass which are necessary to be followed.

Ten types of Kusha are described in the scriptures.

It is believed that when Sita ji was engulfed in the earth, Shri Rama ji ran quickly and tried to stop her, but only Sita's hair could come in her hand. This hair sign turned into Kusha Grass.

In Hinduism, Amavasya Tithi is considered special for shraddha karma, tarpan, pindadan, etc. performed for the ancestors. This date is also considered important for the prevention of charity, Kalsarpa dosha. In Bhadrapada Amavasya, many measures are also taken for the happiness, peace and wealth of the family. Bhadrapada Amavasya is also called Pithora Amavasya, hence Goddess Durga is worshiped on this day. It is said that on this day, Mother Parvati told Indrani the importance of this fast. Goddess Durga is worshiped by married women for the attainment of children and the longevity of their offspring.