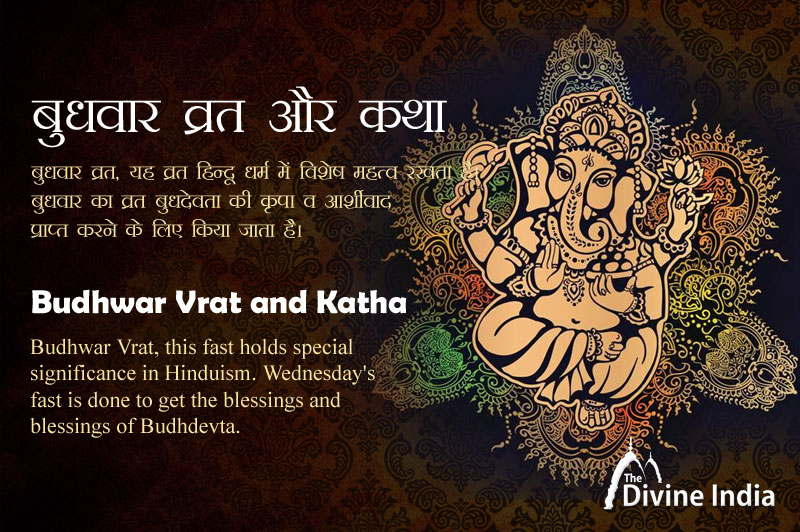 Budhwar Vrat, this fast holds special significance in Hinduism. Wednesday's fast is done to get the blessings and blessings of Budhdevta. If a person desires peace and all happiness in his house, then he should observe a fast on Wednesday. In the fasting of Wednesday, one meal should be taken during the day and night. During this fast, green things should be used - like green vegetables in food, green clothes etc. After fasting for the whole day, in the end, Lord Shiva should be worshiped with incense, Bel-Patra etc. and after listening to the fasting story on Wednesday and after worshiping Budhdev, one should take Prasarad. Prasrad should have jaggery, rice and curd and white flowers should be offered to the Lord on this day.

There lived a man named Madhusudan in the city of Samtapur. He was very wealthy. Madhusudan was married to Sangeeta, a beautiful girl from Balrampur town. Once Madhusudan went to Balrampur on Wednesday to pick up his wife.

Madhusudan asks the wife's parents to send Sangeeta off. The parents said- 'Son, today is Wednesday. Do not travel on Wednesday for any auspicious work. But Madhusudan did not agree. He said not to accept such good and bad things.

After a while, when Madhusudan came back with water from somewhere, he was horribly surprised because another person of his same appearance was sitting next to his wife. Sangeeta too was shocked to see Madhusudan. She could not differentiate between the two.

Madhusudan asked the man 'Who are you and why are you sitting next to my wife?'

Hearing Madhusudan's words, the person said- 'Hey brother, this is my wife Sangeeta. I have brought my wife after leaving her in-laws' house. But who are you asking me such a question?'

Madhusudan said, 'You must be a thief or a thug. This is my wife Sangeeta. I had gone to get water by sitting it under a tree.' To this the person said- 'Hey brother! You're telling a lie.

When Sangeeta was thirsty, I went to get water. I have even brought water and made my wife drink it. Now you keep quietly walking away from here. Otherwise, I will call a soldier and get you caught.'

Both started fighting with each other. Seeing them fighting, many people gathered there. Some soldiers of the city also came there. The soldiers caught both of them and took them to the king. Hearing the whole story, even the king could not take any decision. Sangeeta too was unable to recognize her real husband from either of them.

The king asked to put both of them in jail. The real Madhusudan was horrified at the king's decision. Then there was Akashvani - 'Madhusudan! You did not listen to Sangeeta's parents and left your in-laws' house on Wednesday. All this is happening because of the wrath of Lord Budhdev.

Madhusudan prayed to Lord Budhadev that 'O Lord Buddha, forgive me. I made a big mistake. In future, I will never travel on Wednesday and I will always keep your fast on Wednesday.

Lord Budhadev forgave Madhusudan by praying to him. Then the other person disappeared from the front of the king. The king and others were astonished to see this miracle. With this grace of Lord Budhdev, the king respectfully sent off Madhusudan and his wife.

After walking some distance, they found a bullock cart on the way. The broken wheel of the bullock cart was also attached. Both of them sat in it and went towards Samtapur. Both Madhusudan and his wife Sangeeta started living happily while observing fast on Wednesday. In this way, by the grace of Lord Budhadev, happiness started raining here. In this way, those men and women who listen to the fast story by observing fast on Wednesday, Lord Budhdev removes all their troubles.