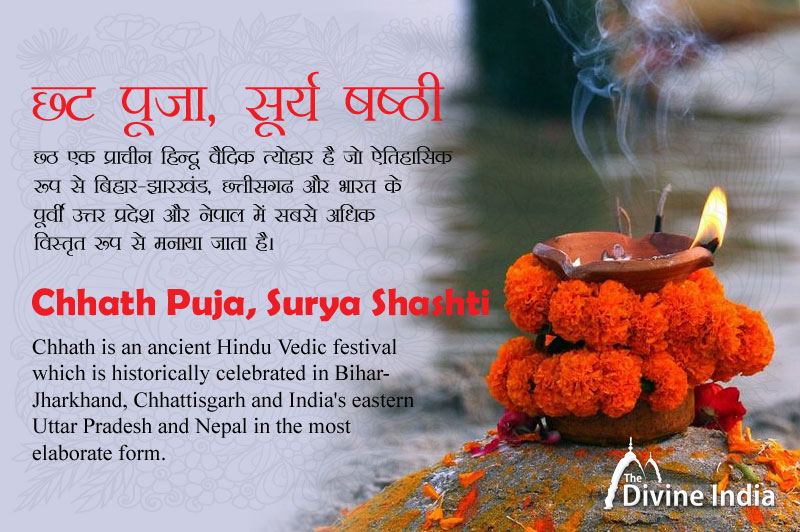 Chhath is an ancient Hindu Vedic festival which is historically celebrated in Bihar-Jharkhand, Chhattisgarh and India's eastern Uttar Pradesh and Nepal in the most elaborate form. This festival is celebrated mainly in Bihar- Jharkhand. But it is also prevalent in areas where the presence of people of Bihar-Jharkhand is present. This festival is celebrated not only in India but also in foreign countries. This festival has now become prominent in the India capital, Delhi. The Chhath Puja is dedicated to the Sun and his wife Usha in order to thank them for bestowing the bounties of life on earth and to request the granting of certain wishes.

The first day of Chhath festival or it can be said that Chhath festival starts from this day, this day is known as 'Nahay-Khay'. This day falls on the Chaturthi of Kartik month, Kartik Shukla Chaturthi. On this day, first of all the house is cleaned and sanctified. On this day, the fasting person can eat food only once in a day. On this day, the devotees take a bath after thoroughly cutting off the nails, etc., washing their hair thoroughly with clean water. Vratis take bath in the nearby river Ganges, a tributary of the Ganges or a pond. While returning, he brings with him Gangajal which he uses for cooking. The fasting eats food only once on this day. In the food, Vratis use pumpkin vegetable, moong gram dal, rice. This food is cooked in a bronze or earthen pot. Mango wood and earthen stove are used for cooking. When the food is prepared, first the fast eats the food, only then other members of the family eat the food.

The second day of Chhath festival is known as Kharna or Lohanda. It is celebrated on Panchami of Kartik month. On this day, the fasting fasts fast for the whole day. Do not take even a drop of water before sunset. In the evening, kheer is made using rice jaggery and sugarcane juice. Salt and sugar are not used in cooking. After giving these two things to the Sun God, they do 'solitude' in the same house, that is, they accept it by staying alone. All the family members go out of the house at that time so that there is no noise. It is against the rules of the festival to hear any kind of sound for the fasting person while eating alone.

After eating the fast again, he feeds the same 'Kheer-Roti' to all his family members and friends and relatives. This whole process is called 'Kharna'. Rice pitha and ghee-laden roti are also distributed as prasad. After this, for the next 36 hours, the fasting fast is kept Nirjala. At midnight, the fasting prepares special prasad Thekua for Chhath Puja.

The third day of Chhath festival which is known as Sandhya Arghya. It is celebrated on Kartik Shukla Shashthi. This day is a special day of Chhat Puja. Special prasad like thekua, also known as rice laddus or kachvaniya, is prepared for Chhath puja. For Chhath Puja, a basket made of bamboo called Daura is put in the offerings of worship, fruits and kept in Devkari. After offering worship, in the evening a coconut, five types of fruits, and other items of worship are placed in a basket, which the man picks up with his hands and takes it to the Chhath Ghat. It is not impure so that it is kept on the top of the head. On the way towards Chhath Ghat, women usually go singing the song of Chhath.

Arghya is offered to the rising sun on the morning of Kartik Shukla Saptami on the fourth day. Even before sunrise, the fasting people worship the rising sun god at the ghat. The dishes offered in Sandhya Arghya are replaced by new ones, but the tubers, roots, fruits and vegetables remain the same. All the rules and regulations are the same as in the evening prayer. At this time only the fasting people stand in the water facing east and do Suryapasana. After the worship is over, the ghat is worshipped. After distributing prasad among the people present there, the fasting comes home and also distributes prasad to his family at home. Vratis come back home and worship the Peepal tree in the village, which is called Brahma Baba. After the puja, the fasting is completed by drinking sherbet of raw milk and eating some prasad, which is called Paran or Parana. The fasting people eat salty food this morning after fasting from Kharna till date.

Many stories are prevalent in relation to Chhath fast. According to one of them, when Pandavas lost their entire palace in gambling, then Lord Krishna suggest to Draupadi for Chhath fast. When Draupati completed the fast, her wishes were fulfilled and the Pandavas got the Raajpat's back.

According to one belief, Lord Rama and Mata Sita fasted Kartik Shukla Shishtha on the establishment of Ramrajya after the Lanka victory and worshiped the sun god. Saptami had received a blessing from Sun God after re-rituals during sunrise.

If the Chhath festival is seen from a scientific point of view, then a special astronomical transformation on the date, at this time, the ultraviolet rays of the Sun are gathered in greater quantity than the normal on the surface of the earth, hence due to its possible maladies, the power to protect is achieved. Following the festival of Chhath Puja, the animals are protected from harmful effects of sun light. In Hindu religion, Lord Sun is worshiped for the treatment of various types of skin diseases including leprosy diseases.