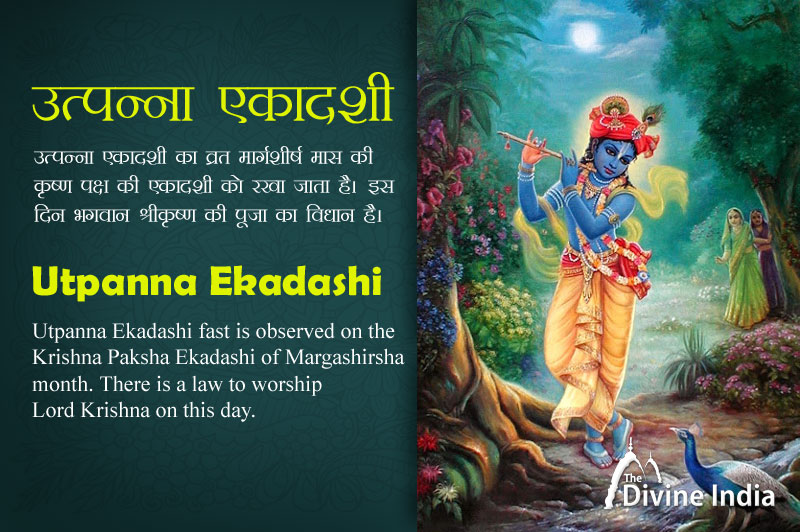 Utpanna Ekadashi fast is observed on the Krishna Paksha Ekadashi of Margashirsha month. There is a law to worship Lord Krishna on this day. Those who observe fast on Ekadashi do not eat food in the evening on the day of Dashami. On the day of Ekadashi, Lord Krishna is worshiped with flowers, water, incense and Akshat at Brahmavela. Only fruits are offered during this fast. It is considered to be a combined part of Brahma, Vishnu, Mahesh Tridev. This part appeared in the form of Dattadaya. It is considered to be a fast that gives salvation.

Once in Satya Yuga, a demon named Mur defeated the gods and deposed Indra. The deities reached the shelter of Lord Shankar. Lord Shankar sent the deities to Vishnu. Vishnu defeated the demons but the peacock ran away. Seeing the mur running away, Vishnu stopped fighting and took rest in the cave of Badrikashrama. Mur reached there and wanted to kill Vishnu. Immediately a girl child was born from the body of Vishnu, who killed the peacock. The girl told Vishnu that I am the power generated from your part. Vishnu ji pleased and blessed that girl that you will be able to bring to me the creatures who are estranged from me due to illusion in the world. Those who worship you will be happy for life. This girl is called 'Ekadashi'. Among the 24 Ekadashis of the year, this Ekadashi is such that its significance is incomparable.