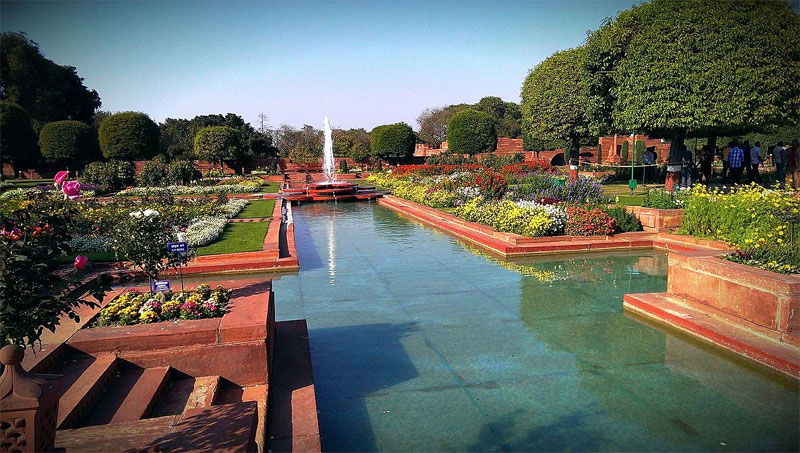 Mughal Gardens is one of the most important historical gardens in Delhi and is famous for various wide variety of flowers, some of which are very rare and extinct. Mughal Gardens is the only one in the world that can see colorful flowers from around the world. The Mughal Gardens is located in the backyard of Rashtrapati Bhavan in the center of Delhi, and this garden was built for Lady Hardinge wife of Lord Hardinge and designed by the famous architect, Sir Edwin Lutyens. Sir Edwin Lutyens had finalized the designs of the Mughal Gardens as early as 1917; however, it was only during the year 1928-1929 those plantings were done. This garden is Spread over 15 acres of land.

The garden is divided into four parts and the four are different and unique from each other. There are many small gardens such as Pearl Garden, Butterfly Garden and Circular Garden, etc. There are many lines of flowering plants engaged in Butterfly Gardens. It is believed that this place is best for seeing butterflies. A variety of flowers can be seen in the Mughal garden including Gulab, Marigold, Sweet William etc. In this garden, herbs and medicines along with flowers are also grown. There is a separate part for them, which is called Drug Garden. In the Mughal Gardens there are more than 250 varieties of roses alone, including Boone Nut and Oklahoma.
On the basis of texture, there are four parts of Mughal Gardens –

Currently, more than three hundred permanent and casual staffers have been deployed for the development and maintenance of the garderbs Rashtrapati Bhavan. Mughal garden opens for tourists for a month in the spring.

Mughal Gardens is open only in the months of February and March, from 10:00 to 4:00 p.m. all the days except on Monday, when the flowers are in full bloom. Arrangements are made for drinking water, toilets, first aid, medical facilities and comfort rooms for senior citizens, women and children.

President Ramnath Kovind will inaugurate the gardens, as part of the ‘Udyanotsav’, on February 4.