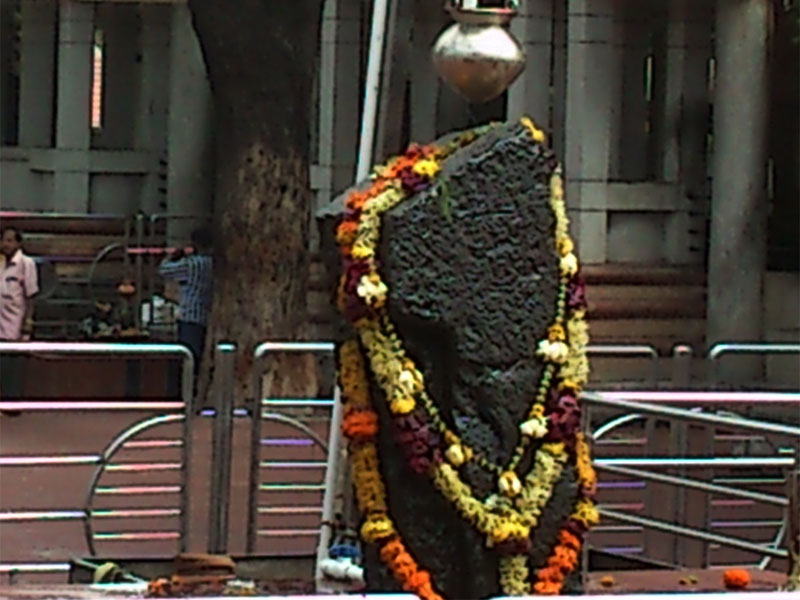 The deity here is "Swayambhu” that is self emerged from earth in form of black, imposing stone. The idol of Lord Shani is 5 feet 9 inches high and 1 foot 6 inches wide. There is no premise of Shan Devi idol. This idol is under an open sky on a square marble. Here there is sunny, octahed flame, sunburn, storm or rain, standing in all seasons without holding a roof.

The story of Shani Dev's idol is being told generations. Lord Shani Dev appeared in a cowboy's dream. He told the shepherd that he is 'Shanishwar'. He also told that the unique looking black stone idol is his own form. The shepherd prayed and asked God whether he should build a temple for him. For this, God Shani Dev said that there is no need for roof because the whole sky is its roof and he likes to be under the open sky. He asked every Saturday to do daily worship and 'Telabhishek'. They also promised that the whole village would not be afraid of dacoits or thieves or thieves.

Therefore, even today, Lord Shanishawra can be seen in the open yard without any roof. To date, there are no gates for any home, shops. The houses, huts, shops, etc. are located within a kilometer radius of this Lord Shani temple, there are neither doors nor locks. No burglary or theft information was reported until 2010 when theft was reported for the first time and then another person was reported in 2011. Some people who tried to steal Before they could cross the border. In a few minutes of theft, blood vomited and died.