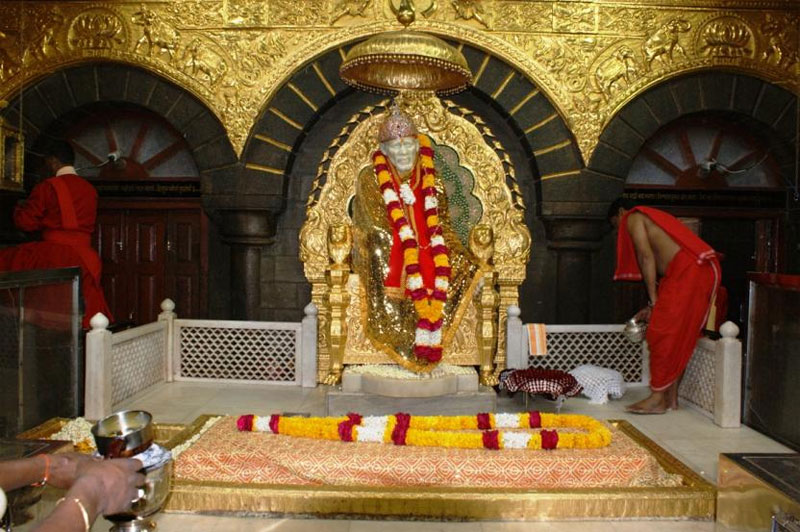 Sai Baba Temple is located in Shirdi village, Ahmednagar state, Maharashtra, India. The temple is called the religious place of all religions. It is situated in the heart of Shirdi village and it is a major center of pilgrims from all over the world. The temple complex of Shri Saibaba is about 200 square meters.

The temple is also known as Sai Baba of Shirdi. Sai Baba was the spiritual teacher. Sai Baba considers his devotees as of a saint, a fakir, a satguru and incarnation of the Lord Shiva. Sai Baba was being honored as a God by Hindus and Muslim devotees in his lifetime, and even today accepted as a God. Sai Baba has now been honored as the incarnation of Shri Dattatreya, and is considered as a Saguna Brahma. The devotees of the Sai Baba has credited of being the creator of universe, stable and destructive. He is decorated with ornaments and all forms of Hindu Vedic deities as he is the supreme God.

It is believed that Sai Baba was born in 1838 AD. There is no clear explanation for their birth, family and early years. He started living in Shirdi from 1858. Sai Baba did many miracles in his life time, most of whom also treated the diseases by miracles. Due to the lack of adequate treatment for diseases such as cholera, leprosy, and plague, the diseases were large-scale.

Sai Baba also condemned the discrimination on the basis of religion or caste. It is not clear whether he was a Muslim or a Hindu. Both used to practice Hindu and Muslim rituals, used to teach words and figures from both traditions, and in the end, they took samadhi at Shirdi on October 15, 1918.
Sai Baba used to speak one thing, 'Allah Malik’ and 'Sabka Malik Ek', which is associated with both Hinduism and Islam. He is also known to have said ‘Look to me, and I shall look to you’.

Every day about 25,000 pilgrims visit Sai Baba temple in Shirdi village to visit Sai Baba. In the festival season, more than 100,000 devotees visit the temple every day. Temple complex has been renovated in the year 1998-99 and now all necessary facilities are available such as Darshan Lane, Prasadal (lunch and dinner), Dan Counters, Prasad counter, Canteen, Railway Reservation Counter, Book stall etc. The accommodation facility is provided by the institute.

The present temple is administered by Shri Sai Baba Institute Trust in Ahmednagar district. The temple complex has all the basic facilities, such as drinking water, rest house, sitting and resting. There are many shops selling religious objects, books, paintings and food items in the temple.