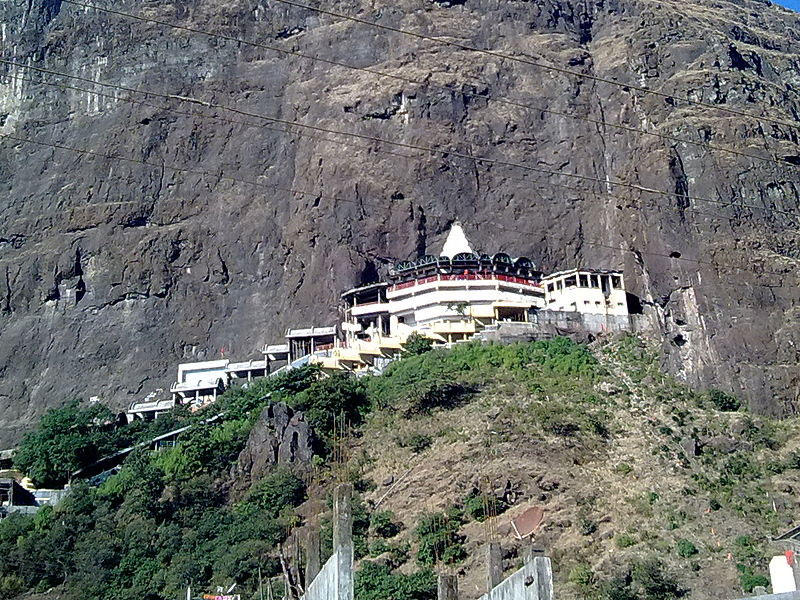 Saptashrungi or Saptashringi Temple is a famous pilgrim center for Hindus. This religious place is situated in a small village, Kalwan taluka Nanduri near Nashik. This village is located in the state of Maharashtra, India. Saptashringi Temple is located at a distance of 60 km from Nashik. The temple is famous in Maharashtra as the 'Three and half Shakti Peeth'. According to Hindu traditions, the goddess Saptashringi resident is located within seven mountain peaks. Sapta means seven and shrung means peak. Can be reached the Saptashringi Devi Temple by the stairs, total steps is 510.  The maintance work of observing the temple is done by Shri Saptashringa Nivasini Devi Trust.

Saptashringi is a mountain with seven hills and this place of Goddess is surrounded by these hills. Which is called locally Ghads. The average height of the peaks is approximately 4500 feet.
Saptashringi Temple is one of the 51 siddhapeetha. The goddess of this temple is also called the goddess of seven hills. Everyday devotees come from all over India for the darshan of Mother Saptashrungi Devi. During the festival of Navratri, a large number of people visit to the temple for Goddess blessing.

According to mythology, Devi Sati gave Her life by jumping into the fire  of the havan organised by her father King Daksheshwara. When Lord Shiva was running moving around the universe carrying Her dead body in His hands then Lord Vishnu cut Her body into 51 parts using His Sudarshan Chakra. Out of the 51 parts, the right hand of Devi Sati fell at this place.

It is such a legend that while breaking a bee hive by a devotee, he had seen this idol of Goddess. The statue of this goddess, situated in the mountain, is eight feet high. It has eighteen arms. Goddess has taken arms in all hands, which the gods had provided them to fight the Mahishasura monster.

Among them, the trident of Shankar, Chakra of Vishnu, the conch of Varuna, the fire of fire god, the bow-arrow of the air god, the thunder of the Indra, the punishment of the yama, the scintillation of Daksha Prajapati, the kamandala of Brahma, the rays of the sun god, the sword of the temporal Goddess Loss of Kshirsagar, Kundal and Kadha, Vishwakarma's sharp prashu and Armor, Kamalah of the sea, Sinhavahan and Gems of Himalaya.

Blog/Hinduism
What is Meaning of Shivling?