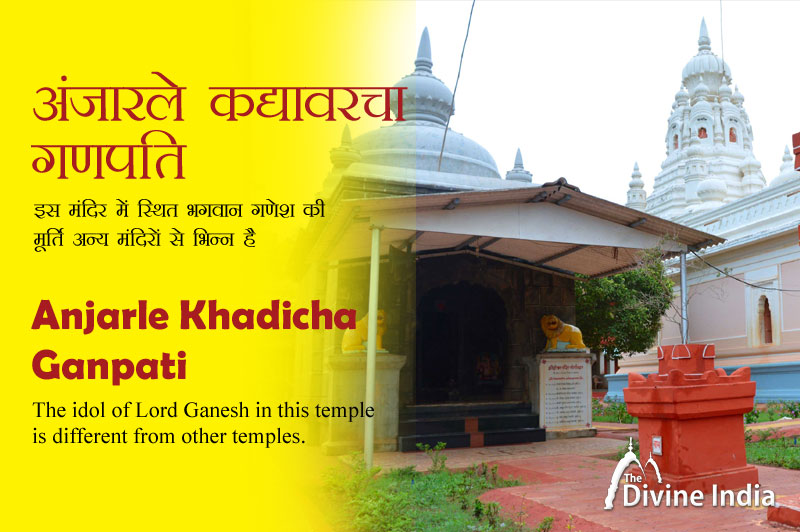 Anjarle Khadicha Ganpati Temple is a famous temple of Hindus, which is located in the village Anjaral of the state of Maharashtra, District Ratnagiri. This temple is completely dedicated to Lord Ganesha.

The idol of Lord Ganesh in this temple is different from other temples, as the trunk of Lord Ganesha is tilted towards the right instead of the usual left. It is known as Ujvya Sondecha Ganapati. The idol is also said to be an awakened deity, who answers the pleas of its petitioners (Navasala Pavanara Ganapati). There is a stone staircase to the right of the temple to reach the top of the temple, which has an enchanting view of the surrounding coconut and betel nut trees, the nearby Suvarnadurga Fort, the Arabian Sea and the surrounding hills. There is a pond in front of the temple where visitors can feed big fish and turtles. There is a small temple of Shiva next to the temple of Ganesha.

Anjarle is known for the Khadicha Ganpati temple called Ganpati on a rock in Marathi. This temple was originally constructed using wooden pillars. 1150 It was rebuilt between 1765 and 1780.

There are many rumors about the origin of this temple, but unfortunately there is no evidence to shed light on it. Many fables claim that the temple was built in the 12th century, and that the old temple structure was made entirely of wood. The administration of the temple has been with the 'Nistur' family since the year 1630. According to legends, this temple was on the seashore in ancient days. The same beach was home to two other temples of Ajayrayaleshwar and Siddhivinayak.