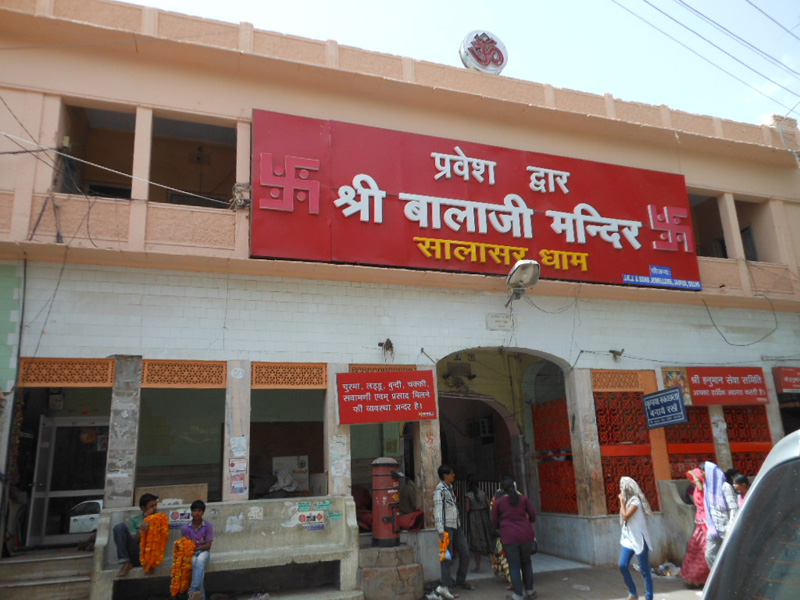 Salasar Balaji or Salasar Dham is a place of religious importance for the devotees of Lord Hanumana. It is located in the town of Salasar, on NH-65 near Sujangarh in Churu district, Rajasthan. It is located near the pilgrim centers of Rani Sati Temple and Khatushyamji. The temple of Balaji which is another name of Hanumana is situated in the middle of Salasar and attracts innumerable worshippers throughout the year specially on Chaitra Purnima and Ashvin Purnima. The temple of Salasar Balaji is now considered to be a Shakti Sthal (a place of power) and Swayambhu (self creation) by faith, belief, miracles and wish fulfillments of the devotees.

The idol of Balaji here is different from all other idols of Lord Hanumana. Hanumana possess round face with moustache and beard making it the most unique idol among the other idols of Hanumana all over the world.

The initial temple was constructed using mud-stone in the samvat 1811 (1754 AD) by Mohandas Maharaj after getting inspired by the unusual appearance of Balaji in his dreams. The current building is made of bricks, stones, cement, lime mortar, and marble. The entire circulatory path, the Sabha Mandap (prayer hall) and the Sanctum Sanctorum is covered with artistic works of Gold and Silver. The vestibule, the doors and the utensils used in worshiping are made of silver. The main gate is made up of carving works of white marble. The temple shrine and the sanctum sanctorum are decorated with floral patterns and other kinds of mosaic works done in Gold and Silver to give the temple a rich look.

It is believed that on Shravan Shukla-Navami -Samvat 1811, a miracle happened. A Ginthala-Jat farmer of village Asota found idols of Balaji Lord Hanumana covered with sand while ploughing his fields.This news of the appearance of Lord Balaji spread in the village Asota immediately. The Thakur of Asota also heard the news. Balaji ordered him in his dream to send the idol to Salasar in the Churu district. The idol was sent to Salasar and consecrated at the place known as Salasar Dham today.