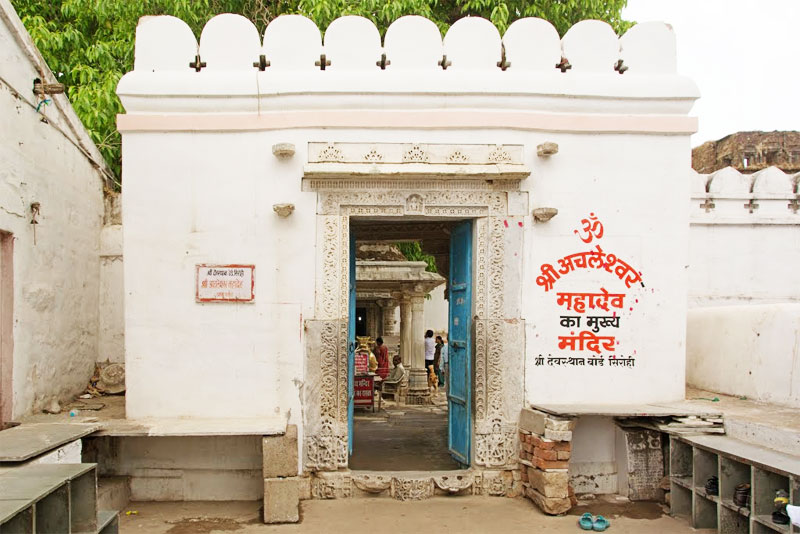 Achaleshwar Mahadev Temple is a Hindu temple dedicated to Lord Shiva. This temple is located outside the fort of Akalgarh, which is located in Abu Road Tehsil of Sirohi district, Rajasthan. It is believed that this temple was built in the 9th century by the Parmar dynasty. Later, in 1452, Maharana Kumbh rebuilt it and named it Achalgarh.

'Achaleshwar' is a word that reflects the Sanskrit word and the Sanskrit word 'Achal' which can not be move or immovable, and 'Ishwar' means 'God', While separating the word 'Mahadev', the great (Maha) Lord (Dev), which shows Lord Shiva. The god whom this temple is dedicated to.

The temple has a huge statue of Nandi, Lord Shiva, which weights about 4 tons. This is made up of five metals, gold, silver, copper, bronze and zinc. According to a popular local legend, the statue of Nandi protects the temple from the invasion of Muslim invaders. The hidden bees in the temple have saved the temple many times. There are many other sculptures in the temple, in which sphatik is a quartz stone, which appears opaque in natural light, but becomes crystal-like when it becomes light.

Mount Abu, the only hill station in Rajasthan, is also known as Ardhakashi as there are many ancient temples of Lord Shiva here. According to the Puranas, Varanasi is the city of Lord Shiva and the Mount Abu is suburban of Lord Shiva. It is said that the mountain here is hinged on due to the thumb of Lord Shiva. when the thumb of Lord Shiva will disappear, on that day the mountain will be destroyed. There is a natural crater under the thumb of God. whatever the water is poured to this hollow, but it never fills. Where does water go in it, it is still a mystery. There is a huge tree of Champa in the chok of the Achaleeshwar Mahadev temple complex. Dharmakanta is made on the left side of two artistic pillars in the temple, whose craft is amazing. It is said that when the ruler of this region sat on throne, Achaleshwar used to take the oath of justice with the people under the Dharmakante by receiving blessings from Mahadev. Temple of Dwarkadhish is also built in the temple premises. Outside the sanctum, there are grand statues of black stone of Narsingh, Vaaman, Kachchhap, Matsy, Krishna, Ram, Parasurama, Buddha and Kalngi incarnations. The temple has a pond with idols of three big stones buffaloes. It is believed that these buffs represent monsters.