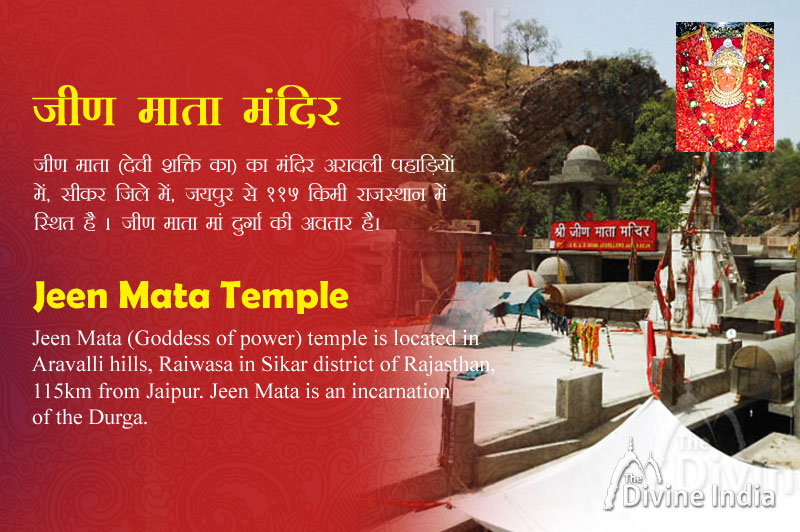 Jeen Mata (Goddess of power) temple is located in Aravalli hills, Raiwasa in Sikar district of Rajasthan, 115km from Jaipur. Jeen Mata is an incarnation of the Durga. Jeen Mata place is known as Shakti Peeth and its full and real name was Jayantimala. The sacred shrine of Jeen Mata is believed to be a thousand years old. The year of its construction is not known, it is believed that Pandavas during their exile from Hastinapur reconstructed the temple in the present style. The temple of Jeenmata was a place of pilgrimage from early times and was repaired and rebuilt several times. A natural grace of serenity is lent by the lushgreen vegetation and rich flora, fauna around the temple. The architecture of temple is very good. The main hall has pillars covered up top to bottom with engraved flora and fauna, dancers and deities.

It is surrounded by dense forest. Its full name was Jayanti Mata. The temple was constructed around 1200 years ago. The temple of Jeen Mataji was a pilgrimage from early times and was repaired and rebuilt many times.

There is a belief that in a village Ghoghu of Churu, king Ghangh loved and married an apsara on the condition that he would not visit her palace without prior information. King got a son called Harsha and a daughter Jeen. The two children practiced extreme asceticism and with time Jeen gained status of Durga as her avatar and Harsha as incarnation of Bhairon. Jeen Mata is also known as Mahishasura Mardini Durga with eight arms.

There are a number of dharamshalas to accommodate large number of visitors. Just close to this temple her brother Harsh Bhairav nath's temple is situated on the top of the hill. The temple attracts a large number of devotees from all over India and abroad. The devotees offer their prayers to Jeen Mata and have her darshan throughout the year. On the occasion of navratri festival special pujas are arranged here.

Jeen Mata's main followers include the Rajputs, Jeengars and Meenas alonwith Baniyas of the area. Jeen Mata is the kuldevi of the Meena's,Shekhawati rajputs (Shekhawats) and Jeengars, a warrior class of Rajasthan. A large number of Jeen Mata's followers reside in Kolkata who keep visiting Jeen Mata temple.