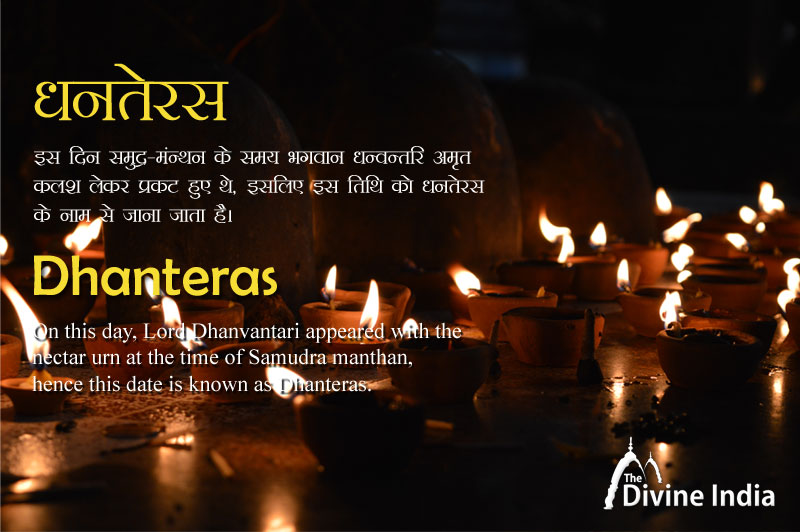 The Krishna Paksha of Kartik month is celebrated as Trayodashi. This is good news for the arrival of Diwali. There is a law to worship Dhanvantari on this day. It is said that on this day Dhanvantari Vaidya brought Amrit Kalash from the ocean. Hence this date is also called Dhanteras, Dhantrayodashi and 'Dhanvantari Jayanti'. The Government of India has decided to celebrate Dhanteras as National Ayurveda Day.

This date is also very important in Jainism. Dhanteras is also called 'Dhyana Teras' in the Agama. Lord Mahavira had gone on this day for Yoga Nirodha to go to the third and fourth meditation. After three days of meditation, Lord Mahavir attained Nirvana on the day of Deepawali, while stopping yoga. Since then this day became famous as 'Dhanya Teras'.

On this day, new utensils are bought in exchange for the old utensils that are broken in the house. It is believed that buying an item with money on this day increases thirteen times. On this occasion people buy coriander seeds and keep them at home. People sow these seeds in their gardens or fields after Diwali.

Buying silver utensils on this day is considered very auspicious. Because silver is a symbol of the moon, which gives coolness and the wealth of contentment resides in the mind.

According to a popular legend, when the Gods and Asuras performed Samudra Manthan (churning the ocean) for Amrita (the divine nectar of immortality), Dhanvantari (the physician of the gods and an incarnation of Vishnu) emerged carrying a jar. Amrit on the day of Dhanteras.

The Vedic deity Yamraj is also worshiped on this day. For Yama, by pouring oil in the lamp of flour, cha lights are lit. Yama is worshiped by lighting lamps with naivedyas like water, roli, rice, jaggery, and flowers.

Once Lord Vishnu along with Lakshmiji came to roam the earth. After sometime Lord Vishnu said to Lakshmiji - I am going towards south direction. You stay here, but Lakshmiji also followed Vishnu. After walking some distance, a cane field was found. Lakshmi ji broke a sugarcane and started sucking it. When God returned, he found Laxmiji sucking sugarcane. On this Vishnu ji got angry on Lakshmi ji and cursed Lakshmi that I had forbidden you to come here, but you did not listen and committed the crime of stealing the farmer. Now you serve this farmer for 12 years for this crime. Saying this the Lord left them and went to Kshirsagar. Then Lakshmi ji started living in the house of that poor farmer.

The farmer did the same. Four quadrilaterals came out as soon as they put the shells in Gangaji and they were ready to carry the shells. Seeing such a surprise, the farmer asked Gangaji - Whose are these four hands. Gangaji told the farmer that these four hands were mine. Who has given you the shells that you have presented to me?

The farmer said - a man and woman have come to my house. They are Lord Lakshmi and Vishnu. Ganga said, don't let Lakshmi ji go, otherwise you will become poor again.

The farmer did not let Laxmiji go when he returned home. Then God explained to the farmer that because of my curse, Lakshmiji has been serving you here for twelve years. Then Lakshmi ji is fickle, big people could not stop her, don't be stubborn.

Then Laxmiji said - Farmer! If you want to stop me, tomorrow is Dhanteras. You keep your house clean. Keep a ghee lamp lit in the night. I will come to you

You worship me at that time but I am. Will be invisible

Once the eunuchs told Yamraj that Maharaj's untimely death also causes our minds to swell. Yamraj was moved and said, 'What to do? We have to do such unpleasant work for the dignity of the law. Describing the way to avoid premature death, Yamraj said, 'Worshiping Dhanteras and offering a lamp duly can get rid of premature death. Wherever the house where this worship is performed, there is no fear of premature death. Due to this incident, the practice of donating lamps to Yamraj along with Dhanvantari worship on the day of Dhanteras was prevalent.

why is dhanteras festival celebrated?

When is the festival of Dhanteras in 2022?

What is auspicious to buy on the festival of Dhanteras?

Buying silver utensils on this day is considered very auspicious. Because silver is a symbol of the moon, which gives coolness and the wealth of contentment resides in the mind.

On this day new utensils should be bought in place of the old utensils which are broken in the house. It is believed that buying an item with money on this day increases it thirteen times. On this occasion people buy coriander seeds and keep them at home. People sow these seeds in their gardens or fields after Diwali.